As a long time user of Explorer Plus, I was delighted to find your wonderful Directory Opus file manager; it is a power user’s delight.

I have a few suggestions as follows.

NEEDED. New option to prevent multiple instances of DO from opening. On a slow computer, DO may appear to not have opened and I will select it again only to be presented with 2 or 3 instances of it running which I have to close down.

FIX. Broken Fit to Page does not work for standalone image viewer; it does nothing to the image size.

I will from time to time add more items to this list as I discover them.

Thanks for a WONDERFUL file manager and keep up the good work.

Broken Fit to Page
As far as I know the current Fit-To-Window is good for viewing large images, since it reduces them, but when viewing smaller images you have to manually zoom in and out...

Multiple instances
You can disable this: 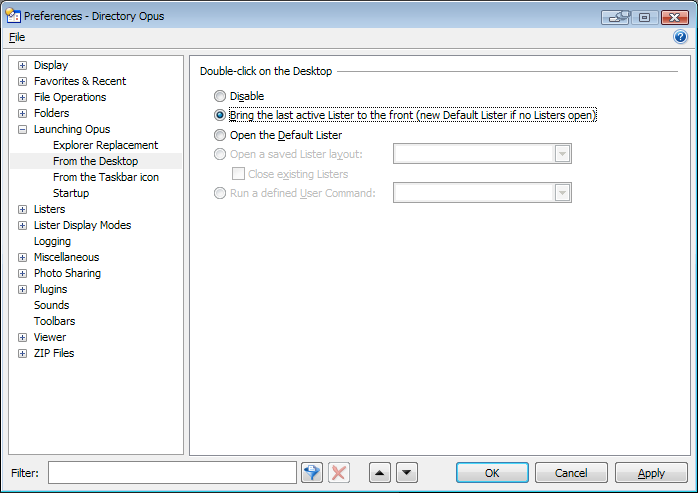 As far as I know the current Fit-To-Window is good for viewing large images, since it reduces them, but when viewing smaller images you have to manually zoom in and out...

That’s the problem; all image viewers that I have ever used can BOTH decrease an overly large image AND increase a small image to full screen size. ACDSee has THREE setting... Reduce, Enlarge and Reduce or Enlarge. Opus needs something like that. FastStone Image Viewer also does the same thing as do most others.

Your suggestion about Multiple Instances does not work, Opus is already set up like that. It is true that only one instance will open from the desktop but that is not what I am talking about. Clicking on Opus in the Start Menu multiple times will open up another instance for each click. I have Opus set up in my Logitech keyboard SetPoint software and it too will open up multiple instances for each press of the key. The same exact thing happens when assigning a Windows Hotkey to Opus.

Opus still needs an option to prevent multiple instances from occurring for any reason. This is a fairly common option on many hi-end programs.

With future posts, please create a separate thread for each issue unless the two things are closely related. (See here for reasons.)

Reduce, Enlarge and Reduce or Enlarge

There are times when I'd like to see that as well. A feature request has been filed with GPSoftware.

Opus still needs an option to prevent multiple instances from occurring for any reason.

Which command is being run by the icon you are double-clicking and the hotkey you've created? The options Christiaan posted probably don't apply to the commands you are running, but it should be easy to modify the commands to do what you want, depending on exactly what that is. (e.g. Do you want to open a particular directory when you run the command?)

Presumably you're not seeing multiple instances of the process (more than one dopus.exe in task manager), just multiple windows, right?

(...) Clicking on Opus in the Start Menu multiple times will open up another instance for each click. I have Opus set up in my Logitech keyboard SetPoint software and it too will open up multiple instances for each press of the key. The same exact thing happens when assigning a Windows Hotkey to Opus.(...)

Ok, just make a new shortcut using this target in the properties box:

THANK YOU SOOOooooooo...... MUCH

The more I get into Opus the more powerful I realize it is.

With all its power I am still surprised that there is not a check box to turn off multiple copies of Opus from loading. I have several other program that allow that.

Although the command line switch works very nicely, it needs to be a Settings option as sometimes you need multiple instances but most of the time you do not so it needs to be quickly accessible.

Thanks for the assistance;
Doc

You never actually get multiple instances/copies of Opus running in memory. You can open multiple windows but they all come from the same instance, the program's overhead is shared between all the windows.

I think he's just talking about having a single preference for 'Single Lister/Instance' mode rather than having to jump around and having to modify the different 'Launch Opus from...' settings and then modifying buttons with the required command arguments, and then there's the 'Open external folders in a new tab' option also... which, incidentally... shouldn't THAT option really also cause a lister to be reused without having to modify Windows 'shortcuts' to dopus.exe to use dopusrt and LASTACTIVELISTER shenanigans? I know what the 'intent' of the option is supposed to be with 'default verb' or shell 'open' calls or whatever, but technically a shortcut loading dopus.exe is also an 'external call'.

Many programs that support tabs or MDI views have a single option to make there only ever be ONE window open...

It might be nice for new users for Opus to offer something like that, which could then auto-set or unset the individual options for them for one stop shopping. And maybe even have an advanced option that would ALSO get selected that would override things like Go commands withOUT LASTACTIVELISTER arg, to IMPLY the LASTACTIVELISTER arg to preserve the single option approach... but which still could then be individually 'deselected' if someone wanted (which if they're looking for that universal single lister/instance mode in the first place, 'those' ppl probably WON'T need anyway... no?).

Reduce, Enlarge and Reduce or Enlarge

There are times when I'd like to see that as well. A feature request has been filed with GPSoftware.

I'm one of those transplants from explorer plus, so I also really miss the fit to page option for the graphics viewer. Dopus has a "Fit to page" button, but it doesn't do what most graphics programs do for such a function (I believe). Fit to page should do literally that, i.e. fit the image to the space available regardless of whether the image needs to be shrunk or expanded. Perhaps the function that Dopus currently implements should be called "Shrink to fit" or something like that to indicate that the image will only be shrunk. Anyway I still keep explorer plus around just so I can use its graphics viewer. So I enthusiastically second the sentiment behind this feature request

[quote="DocLotus"]Reduce, Enlarge and Reduce or Enlarge

There are times when I'd like to see that as well. A feature request has been filed with GPSoftware.[/quote]
I wish you far better luck with that than I had. I tried through several go-rounds to suggest it was needed and would provide a consistency that is currently missing. The response I got was, literally, "Uh, no."

It is greatly unfortunate, however, that there is no way to enforce this when opening folders from the Everything app. Very frustrating!

This thread is 10 years old. Chances are some of the requests in it have already been done.

If not, please start a new thread with details of what you want, so we don't have to read through a decade old thread about several different things to work out what those things were again, and which of those things you're asking for.