I created a folder c:\test which contains a file test.txt and I also defined two aliases both pointing to the same folder. 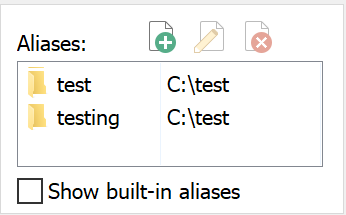 You need to use the {alias} control code to pass path aliases to external commands, e.g. notepad {alias|test}\test.txt

Thanks. I had forgotten about that.