If hiding File Display toolbar alt+let/right stop working. is this a bug or wanted?

The Back and Forward buttons on that toolbar have those hotkeys. If you remove the toolbar, you remove the hotkeys, and would need to add them somewhere else (either to another toolbar, or as standalone hotkeys).

(The Back and Forward buttons that most mice and some keyboards have will still work.)

ok i think i always have to use File Display toolbar. It's not a big problem if you help in the next thing i'm going to ask

Edit: This doesn't work well currently, but may work in newer versions.

That will mean the hotkeys from that toolbar are always there, even if the toolbar itself isn't.

i tried but it creates a "panel" on the left

i tried but it creates a “panel” on the left

Select the toolbar in the list (by clicking its name), but don't turn on the checkbox next to the name.

i know
if i check the box i see the toolbar

If go back from this folder

But as i told you i prefer the solution of moving the commands on the File Display Toolbar.
I know it's a different request so if you prefer i open another discussion.

I think we are talking about ~5 unrelated things now, which is confusing.

But ok i'll ask a different thing and this one is not important anymore.

That panel is showing folder tabs, nothing to do with toolbars.

Oh ok!!!
So the fact is that disabiling Folder Display Toolbar enabling "always enable this toolbar’s keys in Listers”,When going back with ALT+Left Directory Opus creats another tab for the new destination instead of just going back showing contents in the same tab

I'm not using tabs and i selected "when needed" just because i couldn't select "never". i don't want the tab bar at all.

So the fact is that disabiling Folder Display Toolbar enabling "always enable this toolbar’s keys in Listers”,When going back with ALT+Left Directory Opus creats another tab for the new destination instead of just going back showing contents in the same tab

That seems to be true, although it is not what I expected. (That may be a bug, which we need to look into. The Go command will open new tabs if the Alt key is held down when you run it, but it's only meant to do that when you click with the mouse, not when it is run via a hotkey.)

In that case, turn off the *always enable this toolbar's keys... setting for the toolbar, and do what I originally suggested, which is to make standalone hotkeys for the functions you want: 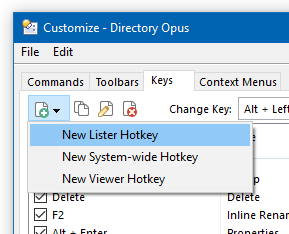 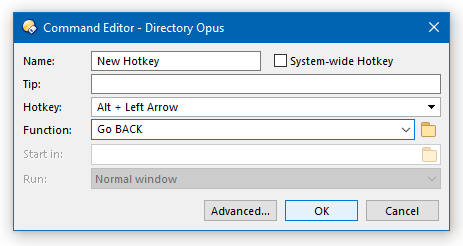 I've tested that and it works without opening new tabs.

But this is not possibile in the Light Edition?

You can create lister hotkeys in both Light and Pro editions.