I just moved and copied some files from an external HDD to a Windows 8 storage space. The single tasks where queued in the progress window.

After a while the progress reporting did show wrong information:
[ul][li] It showed file names from tasks later in the queue.[/li]
[li] The overall progress was for example 4/4 with 100% done but it continued copying files with undefined progress.[/li]
[li] It stopped moving / copying in the middle of single files although the progress bar indicates that moving / copying was not finished.[/li]
[li] Window title shows blank line[/li]
[li] It copied files "after their size", meaning it showed that it copied for example 4 GB of 2 GB (also see screenshot below)[/li][/ul] 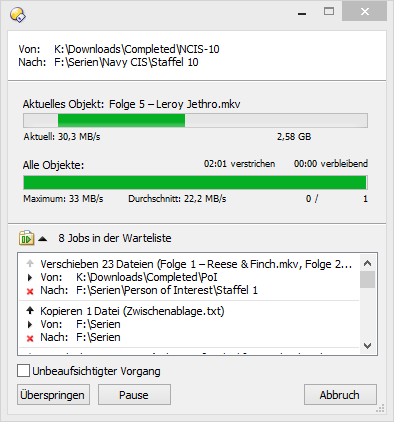 I think however, that this is only a bug in the progress report because as far as I see the files are moved / copied correctly and only files from the task that should be the current one are copied (although it shows me the progress of a task later in the queue).
I just cancelled the whole operation and the progress window disappeared, but the operation itself was not cancelled. I can see files being copied and moved and the HDDs are working, but DOpus is not showing anything.

I experienced the bug first after the final update to 10.5.0.0. I used the beta versions before where I didn't notice this behavior.

Copying files "after their size" will happen if the filesystem reports a file's size is X but ReadFile calls on the file continue to return more data past that point.

That is normal behaviour if you copy a file while it is being written to, for example, and also normal with some filesystems which provide only approximate or unreliable file sizes.

I don't know if that would apply to a Storage Space, or to the situation you were trying with, though. What size are the files reported as if you go to the source directory? Were they being written while they were being copied?

Can you give us exact steps on how to reproduce any of this? Is it reproducible on your machine or something that only happened once?

It is not reproducible. In fact, after I noticed that the operation completed I quit Opus and after that re-initiated the cancelled tasks. It was working fine that time.

The files where all around 1 - 2 GB and definitely not being written while the operation was running. I don't think that Opus really wrote more than the file size that was reported from the file system, the dialog just showed wrong information. All files were copied correctly.