i want a button to open the current/active folder in a new lister, using a specific lister style.

i like switching styles using Prefs STYLELIST, but unfortunately when i switch to single-pane thumbnail mode, then back to my usual dual-pane list mode, the source/inactive pane forgets where it was, and that is a bad thing. looking through the forums i see there's no good solution to that. but i could not find a way to do what i describe above.

anyway... thanks to whoever can help me with this!

If you want to toggle between Dual List displays and a Single Thumbnail display, without forgetting which folder was in the second display, then you can use this:

The first line cycles the Source display between Thumbnails and List modes.

The second line toggles the Dual display on and off, ensuring that the its path is remembered and that when the dual display opens it is the destination and doesn't take the keyboard focus.

The button will appear pushed-in when in Thumbnails mode and normal when not. If you'd rather it appeared pushed-in in List mode instead, move the * in the first line so that it's after List instead of Thumbnails.

thanks again, leo. i've been able to work with these toggle buttons and get better results than with lister styles. i also made one for a slideshow-like view, and at first i couldn't figure out what command to use to toggle the viewer, then i remembered that the cleverl folks behind Opus made the menu items the same as everything else, so i just peeked in there and got what i needed

back to my original question though... is there a way to open the current (or even selected) folder in a new lister? that would be a useful hotkey

is there a way to open the current (or even selected) folder in a new lister?

Make a button with the function... go current new nodual

great, we're getting closer! now the final step - how to combine the two? open the current folder in a new lister in single pane, thumbnail mode...

I think this should do it:

If you edit the command, click Advanced, and put the cursor on the end of the line, you can then use the Arguments drop-down to see the other things you can give to the NEW argument, in case you want to turn on/off other things: 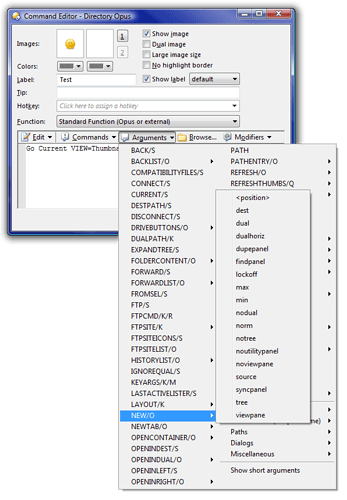 bingo! that works great, thanks leo.

how did you do that screenshot? very slick...

It's made with Kenny Kerr's WindowClippings.

nice app! i don't have need for capturing alpha channels since i'm not on vista, but the delayed capture is quite nice, and the menu capture as well. i'm using the last freeware version of faststone right now, and it works well enough, though it has no menu capture capabilities. have to do a fullscreen and cut it out manually...

anyway thanks for the info