Can you have the Opus listers to always be left-most taskbar icons?

I was wondering if it would be possible to have the Dopus listers to be the left-most Taskbar icons. I refer to them a lot and I can't seem to find them quickly with their program icon. So, it would be nice if they appeared first among the program icons on the taskbar. Anyway to make this happen?

Actually, I think it would be great if the taskbars icons were not arranged by when the programs were opened but by program type or title of the file. But, this is beyond the scope of Directory Opus of course.

I think I figured it out myself. I think if you put a shortcut to Directory Opus on the Taskbar, it will automatically create Directory Opus as the left-most taskbar program. I hope this is true all the time... I'll let everyone know if it isn't.

If you pin a program to the taskbar, it will stay where you pinned it.

(Programs have no control over where they appear on the taskbar; it's a Windows thing.)

Not sure if this is helpful but I use it a lot. But I'm thinks my next move might be trying to open a Lister. It would be a shortcut in the Opus folder, see below. That would give me total control , for my needs, see below.

I developed my system based on the following example as shown below.

Result Example: A:\SYS\TaskBar\Opus This will add a link to the Taskbar.

Any shortcuts you put into the A:\SYS\TaskBar\Opus folder will now be in the TaskBar folder called Opus.You can create as many folders as you have TaskBar room. The folders can also use sub-folders.

When folder is selected, using a Folder Display, it will be displayed on your Taskbar, on the far right.

Anything that I want to display on top I add an asterisk, !TopFileName. This is only until I figure out how to incorporate Lister's in the folder's.
Bob

@amerifax I think you may have replied to the wrong thread?

I thought he was working with the TaskBar and calling Opus.
Bob

He just wanted to change the order of icons on the taskbar. That's all this thread was about.

I thought he was trying to get control of the program icons on the TaskBar Start Menu. If that was it he could get control by creating his own ToolBars.
Bob

I'll explain more clearly what I wanted to do. By the middle of my work day, I have like 20 programs open and their icon and lable are almost in random order on the taskbar. (Actually, they are put in order of the program shortcuts when Windows 10 was first booted up, and then icons with labels are put to the right most spot on this line of icon label on the Task bar.

I wanted to program Directory Opus to always put their icon and label to appear 1st (appear left-most) than any other program. I want this to happen since Directory Opus is basically like a folder tree and when I need to find a new folder or file, I can quickly click on it and find it that way instead of using my search engine.

I hope I cleared up what I was trying to do. Hopefully, I didn't confuse you more!

This might not be exactly what you're looking for but you will be able to view all open Lister's with one click.

Under a previous message, I was trying to show you a different way to have more control over your Lister's almost instantaneously. I'm working with a voice program called Dragon to just say their name and have them open. Until I get the code straightened out I will use a folder connected to my taskbar.

I create a folder on the taskbar that holds a list of many of my Opus Listers.
For now, I can execute my listers with two clicks.

I was wondering if it would be possible to have the Dopus listers to be the left-most Taskbar icons.

The Pin to taskbar option is available in Windows 10 for all programs that are already on the taskbar (as pictured) or from the Start Menu when you right-click it and then go to the More submenu.

Pinned items will be to the left of all non-pinned programs in the taskbar. Pinned items can also be dragged to rearrange them. If you have two different programs pinned to the taskbar, you can choose which one is first by dragging it before (to the left of) the second item. 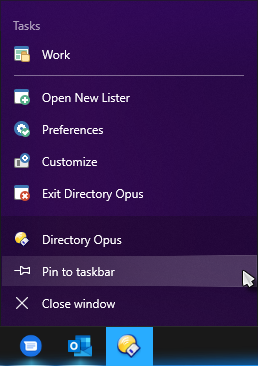 I think this thread was solved a long time ago.