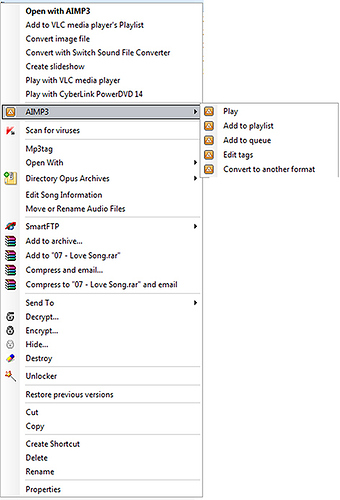 Tip: Organise and Speed-Up Context Menus shows how you can tell Opus to hide 3rd party menu items, and then selectively add the ones you want back in some cases.

Sometimes you can also configure the menus from the program which is adding them, which is always preferable if available.

For some programs, you can re-create menu items which do the same things in Opus, and turn off or hide the items added by the program itself.

The exact details will depend on how AIMP3 adds its context menus, and (depending on which route you choose) AIMP3's configuration and/or command-line options.

AIMP only offers activating or deactivating menu entries, you can't personalize them.

Edit: AIMP can be controlled using DO (via commands and/or filetypes), so you could create your own menu.