I have a folder of mp3 files which are in Chinese characters. If I only display filename, it's fine. But whenever Context type turned on OR Title & Artist column enabled, DOpus crashes (closes itself automantically). This problem only occurs when there are 2+ files in the folder. If I have one file, DOpus won't crash but Artist and Title won't display properly. For example of display problem - [Filename.mp3 | Modified date: 4/26/2006 5:21PM | Attribute: -a | Artist: Singer 5:21 | Album: Album Title -a]

Artist and album data would somehow mix up with mod date and attribute flag. I tried the FAQ and it didn't work. My XP doesn't have any MS update installed so my system shouldn't have anything to do with MS bad patch. Please help, I'm really interested in purchasing this software.

Also, I tried disabling other plugins or all plugins, and disable visual effect too but none of them works. Thanks in advanced.

It's probably caused by the tags being written in a format which Opus doesn't understand. (e.g. Recently it was discovered that Opus doesn't work with UTF-16 strings in music tags, which I think Jon is looking at fixing.)

A short-term solution might be to use a tool to automatically re-write the tags. I don't have any experience of tagging with Unicode/Chinese strings so I don't know which tool to suggest, but The Godfather, MP3Tag or Tag & Rename are probably good places to start.

If you could make one of the files available I'm sure Jon will take a look at it and fix whatever is wrong. At the very least Opus shouldn't crash on a bad input, but hopefully support can be added so the tags show up properly too, without having to re-write them.

Disabling the MP3 Format Sound File plugin should prevent the crash, unless we're talking about folders which Explorer provides, like Desktop, where any crash will be due to Explorer itself (or a shell extension) rather than Opus.

Hi, Thanks for the reply.

I did disable the mp3 plugin (I uncheck mp3 plugin in plugin list). But it will just close itself automatically. Right now, I have to disable Content Type so it doesn't load Title/Artist/Album Title column to prevent crash. Also just a reminder, it only happens when two or more files listed in a folder. Thanks.

Edit: Sorry, not Context Type, it is Content Type.

Can you give me a link to one of these files so I can download it and investigate?

Yes I am uploading it to rapidshare.de. I will post the link when it is done uploading. Thanks.

Hi. v8.2.2.1 fixed the crash! Thanks. But tag displaying has some issue.
See pics.... there're some characters attached in the end of artist and album title tags. Everytime I hit refresh, it will appear different ones. Is there I can fix this at my end? Thanks. 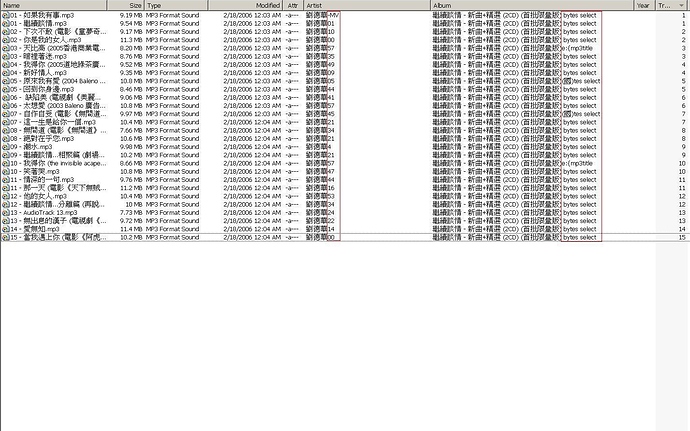 The problem with unicode MP3 tags sounds like what is discussed in this thread.

It looks like an update has just come out (2 hours ago as I type this) which fixes the problem:
[Directory Opus 8.2.2.1)

Hi. I was running 8.2.2.1 which fixed the crash problem. But tag display problem still exist. I was thinking if there's anything I can fix at my computer. Thanks.

Ah, sorry, I missed that.

The tags may work if you re-write them in a different program, but I'm not sure exactly which to recommend.

If you could make an example file available then GPSoft can take a look at it and hopefully make Opus work with it, and I can also try retagging it with some of the tools I have and let you know if one of them makes it compatible.

I can't repeat this here with the previous album you posted containing Chinese tags. Could you post the one you are showing in that screenshot?

Note that we did not bump the product version number as this is such a minor change - it is still 8.2.2. However the file version number of dopus.exe itself has been bumped.