Say I wish to drag & drop a folder from the right window panel into some folder in the folder tree.
During that action I accidentally expand one or more folders that are then showing a long list of subfolders.
The actual destination subfolder got way off-screen.

I don't know of any other way, but to
hit Esc
collapse the expanded folder(s)
and start over

Vainly tried to find an easier way to solve this, that's to say, without Esc, i.e. while still in the drag-and-drop action.

What if, with the 'grabbed' folder, I hover a few seconds over the accidentally expanded folder and the folder would then collapse again, at least an option that will do that?

Yes. Look at the options under Settings>Preferences>Folder Tree>Options.
Particularly the option Expand branches when dragging over the tree.

Thanks - I did look at that option.. Thing is that expanding the right folder is okay, but the folder(s) that are expanded, because one -accidentally- hovers over those folders... I don't see an option to re-collapse them.

later..
I just tried additionally tagging 'Spring-loaded'
when dragging from right to a folder in the folder tree, the folder will expand, rightfully so.
however, whilst still grabbing the folder but then drag back to the right window panel will re-collapse the folder...
matter solved!
thanks. 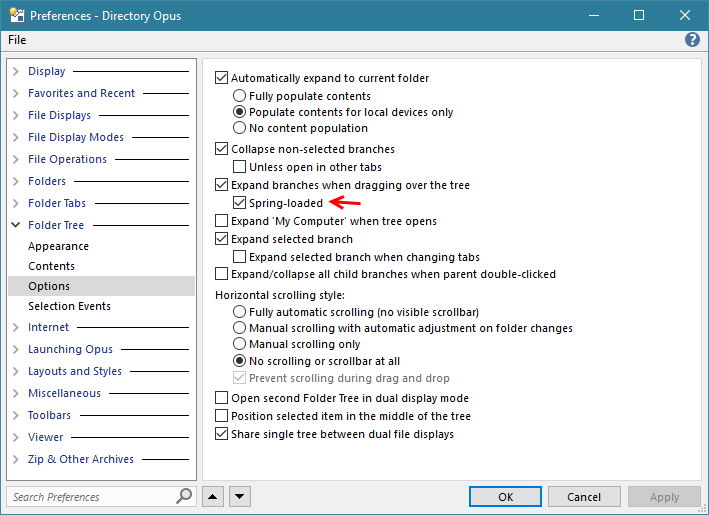