This post explains how to create an Opus button, hotkey, etc. which will copy the selected files from source to destination using the Windows shell. In other words, it will copy files like Windows Explorer (now named File Explorer as of Windows 10) does, instead of using Opus's internal copy routines.

This isn't something many people are likely to want/need often, but it can be useful in special circumstances.

First, download the NirCmd.exe util and copy it to C:\Program Files\NirCmd (if you copy it to somewhere else, modify the command below accordingly).

Then put this command on a new button, hotkey, or whatever you want: 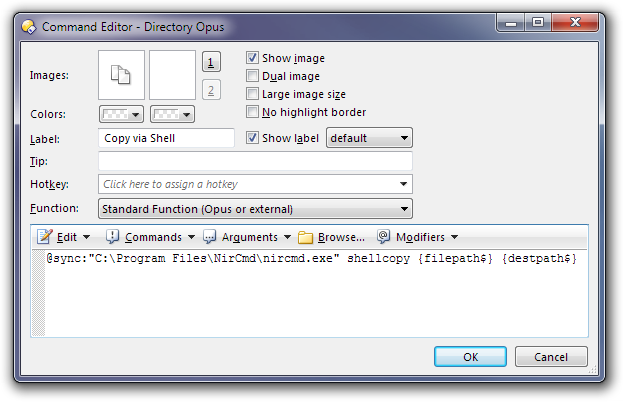 I can confirm that adding this command into the drag/drop context menu works well - probably the most general way to use it:

Probably not working for syncing though.

Well, as it's a standalone separate toolbar button, it naturally doesn't replace the built-in 'buttons' that you would use in the Sync tool panel... but, once the Syn tool determines what needs to be copied, I assume you could use the new 'Select HIDEUNAFFECTED and Select SHOWUNAFFECTED' commands in the 10.1.0.1 (beta) update to select the stuff that needs to be copied - THEN use this custom toolbar button instead of the built-in 'Synchronize' button?

That wouldn't work too well as the all the files would be copied to the same directory (i.e. flattening the source hierarchy into the destination folder, instead of maintaining it).

The button just does a simple file copy from A to B and won't work with more complex things involving Flat View or similar.

Not sure if this is relevant still, but I stumbled across it and wanted to try it out, mainly to practice configuring dopus.

I made the change successfully and it is working - thanks.

The instructions relate to an alternative copy via nirsoft utility when using right click and release, but is there an equivalent for move?

Penny dropped - in my ignorance I thought the nircmd parameters were dopus but I can see now that it's nircmd's shellcopy - thanks again!