I have reinstalled and attempted to scrub errors but this comes back immediately when new install attempts to open - "Directory Opus has encountered a program error and needs to close..... The error (0xC0000005) occurred in thread 'dopus.expandtreethread' ar address 0x00007FFFF0C47923."

Please send us the crash logs if any were saved:

In the event of a crash, Directory Opus usually creates a log file (also known as a "dump file") with information that may be useful in diagnosing the problem. (For problems which don't result in a crash -- e.g. freezes or abnormal CPU usage -- you …

I have quite few crash dumps which I can email. Where should they go?

The page I linked to says where to send them.

I sent you the crash files but have not heard anything further. I reinstalled Windows on the PC and that corrected the DOpus problem, but now it has started to occur on my other PC and I don't want to reinstall Windows on this one. So I've begun trying some of the alternative file managers.

I don't think we received anything, sorry.

There have been a couple of reports today that a Windows Update has started causing what may be the same problem for two other people. (A crash while expanding the folder tree at startup.) One reported that uninstalling that update fixed the problem, but they didn't say what the update was.

We still haven't seen the issue ourselves, FWIW, but from the crash logs I looked at this morning, it looks like a crash that's happening in a Microsoft DLL that deals with cloud storage. Turning off Preferences / Folders / Folder Behavior / Display extended sync attributes for cloud folders (if it's currently on) may help avoid the problem. (Make sure you're on the current Opus version as well, as there was a separate issue with the in older versions.) But ultimately it looks like a bug in Windows.

(There are threads which suggest it can also affect File Explorer, assuming it's the same crash, FWIW.)

Turning off the folder tree, or setting it not to auto-expand, should also avoid the problem.

Sorry - I did send the files to the link you gave me but I guess they didn's come through. I will try again.

Thank you, we'll take a look.

We've found email to be quite unreliable lately, as well as a tendency for Google Apps to classify things as spam (but we try to check our spam folders quite often to work around that). In the longer term, we'll by providing a system which bypasses email.

You can also send the crash logs via a private message here if you wish; just click on my icon for the option.

I do not have dmp files on this computer. How can I change settings on my DOpus when it will not open -- error box everytime.

I do not have dmp files on this computer.

What does the error box look like? Could you post a screenshot? (Alt+PrtScn on the dialog to put it into the clipboard, then Ctrl+V into the post editor here and it'll add it as a screenshot.)

If it's the Opus dialog that looks like this one then there should almost always be dmp files created: 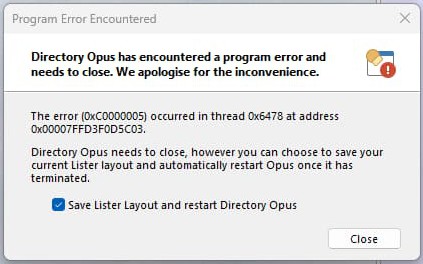 If it looks different then they might not exist.

If you right-click the Windows desktop, is there an Opus Preferences option there? If so, that should let you get into Preferences without opening a lister (main window).

If that menu isn't enabled, but Opus has been pinned to the taskbar, then you can also usually right-click the pinned Opus icon and open Preferences from there.

If neither option is available, open a Command Prompt and run this:

You can also open a lister with the tree turned off using this from a Command Prompt: 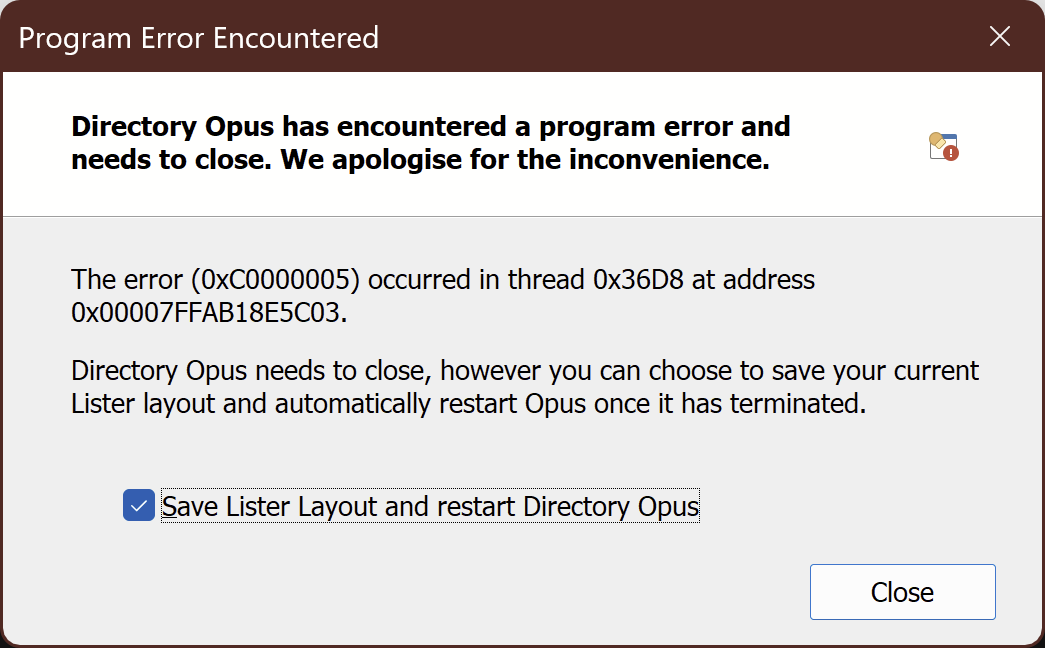 There should be DMP files if you see that dialog.

Type %TEMP% into File Explorer’s location bar, then look for the DOpus.MiniDumps folder.

(Windows has a few Temp dirs in different places, but that should take you to the right one.)

FWIW, another user seeing this issue after updating Windows said that it only happened if he had This PC as the initial folder in new windows.

We still haven’t been able to reproduce it on any of our machines, trying with both Win10 and 11, so far.

Looking at the DMPs you sent, it's the same crash I've seen from a couple of other people, happening inside an operating system DLL, not Opus itself.

I also noticed that, like with their DMPs, I could not download debug symbols for the version of ntdll.dll you're using from Microsoft servers, which is unusual and suggests something is off about the Windows DLLs.

I then did some more digging into the version numbers and it looks like you're using a Windows 11 Insider Build (22621)? That would explain why it isn't happening on my up-to-date normal Windows 11 system (22000).

Windows 11 Insider Builds are beta versions of Windows which Microsoft release to let people test them and find bugs like this. You should report the bug to Microsoft as part of the Windows Insider Program, and send them the dopus.20220827.111605.dmp file.

The bug is definitely inside the Windows code:

Alternatively, switch back to a stable version of Windows if you don't want to help Microsoft iron out their bugs.