D8viewer focus only on mouseover

Now, using d8viewer, when I use the wheel to scroll to the next image (one with a lower res, thus smaller window size), and the window resizes so the mouse is no longer over it, Opus semi loses focus and the wheel does nothing. Space will take me to the next image, so the viewer does actually have the focus, but the wheel won't, unless I mouse over the image, (no clicking needed, just hover) and the window will now scroll to the next image as expected.
So what's changed, is this a W10 thing, or a bug in 12.24, or a setting that I missed? Or some issue with my mouse even? It definitely doesn't happen in W7.
Is there a way to make this not happen? 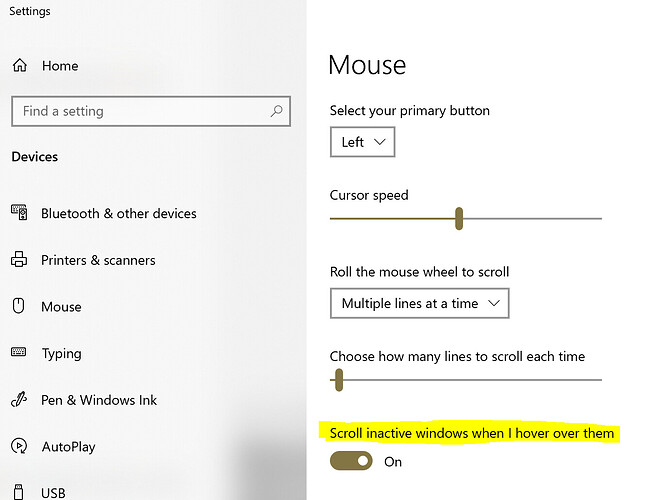 thanks Jon, that was it.

I do have an excuse though, and man, the programmers of 10 sure need one. I knew about the setting in Ease of access, and was about to say, I have it off.

So part of this GUI nightmare says it is off, and the other part says it is on. Nice work guys.

I dislike the change (it makes it even harder to know which application has focus, on top of all the other window-focus-indicator issues in Windows 10 and modern web browsers), but I disliked the Start Menu not working even more, so I got used to it and moving the mouse over the window I wanted the wheel to affect.

Another thing to watch out for, if the option is on, is that using the mousewheel when the pointer happens to be over a combobox control will change the option in the combo (without it opening or anything more conspicuous than the text in it changing, so it's easy to not notice it) in a lot of software. (The ones in Opus tend to be protected against this, but I'm sure we've missed a few, and other software doesn't generally protect against it at all.)

The option itself isn't a bad idea, but making it the default with an OS which had functioned differently for decades, on top of how hard it is now to see which window is active at times (where "the mousewheel is scrolling it, so that means it's active" had sadly become an important indicator as to which app had focus due to things like window borders becoming unreliable as quick focus indicators), and then breaking and not testing even essential parts of the OS with the option toggled to the non-default setting... it's a bit of a joke.

ah, yes, I see. Well, the start menu thing is moot in my case, because I am using Open Shell to give me a W7 start menu. I did notice combo boxes doing stuff they shouldn't have been doing, but I put that down to my incompetence. At least now I know, so if it causes too much grief, I know where to go.

What I truly cannot fathom here though, is how you can have two totally different places, with the same option, that appear to be at odds with each other. It is as if when the MS incompetent team added the W10 bits, they forgot about some of the existing W7 bits that they were supposed to be replacing.

I managed to totally break W10 within an hour of installing it. I changed the default txt app to metapad, and that was fine, until I realised I made a typo in the dir name I had metapad it. I renamed the dir and went to re-associate the txt extension, and bam, lock up city. I had to manually edit the registry to remove all references to the dir that no longer existed. Talk about fragile!

I don't blame you for ranting, it must be unbelievably frustrating to see just how bad this OS is.
Thanks for the warnings

They aren't really the same option. One only affects the mouse wheel, and it directs wheel events to a different window without making it active. The other one makes the window under the mouse active if you hover over it for a period.