Hello. I would like my default view to be one lister in list view, and the other lister to be in detailed view. How can I achieve this?

I save this default, but when I close and relaunch the program, both listers display the view I last saved, either list view or detailed view--never one in each as I wanted.

Do you mean listers (as in whole windows), or file displays (as in each side/half of a dual-display window)?

You'll need to turn on the Format Lock (padlock icon in the status bar) if you want different windows or file displays to override the formats assigned to different folders and types of folders. (i.e. If you want the same folder to be displayed in different ways depending on where it is displayed.)

Re-save the default lister or layout (whichever you are using) after turning on the lock.

Thanks for your response. I may be confused about terminology--in the documentation I see the term "lister" used for a single file window panel rather than the entire (in my case four-panel) window. In any case...as the attached screenshot illustrates, on your recommendation I locked both individual panes the way I want them, then saved the layout as "startup."

Then I confirmed in preferences that on startup launching from Desktop, Opus should open that layout, "startup." Then I close Opus, restart it, and it unfortunately shows the bottom layout, with both panels in detailed view and locked.

Somewhat surprisingly, when from that point I manually open the saved layout "startup," it displays the way I want it, with the top lister in list view, and the bottom one in detailed view. So it seems like it is not opening the "startup" saved layout on startup, despite that setting in preferences.

Thanks for you attention. I hope I can figure this out. 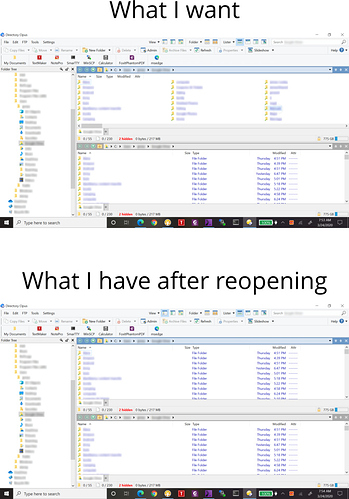 in the documentation I see the term "lister" used for a single file window panel rather than the entire (in my case four-panel) window.

It shouldn't say that. Where does it say that? We can correct it if it does.

Here's the page with defines most of the terminology:

I also tried "set as default lister," your other recommendation, with the same result. Whichever lister is active the last time I do this, is the way both listers display when I relaunch Opus.

If you're using a layout, there's a similar option for each layout under Preferences / Layouts and Styles / Layouts.

Thanks again. I found a way to make it happen, slightly different from what you suggest. Since manually loading the saved layout was working correctly, I set Opus in preferences to "shutdown Directory Opus when the last lister closes." Then when I relaunch it loads the views I want.

Okay, I separately tried your suggestion " turn off references / Launching Opus / Default Lister / Ignore folder format of Default Lister", and that worked, even If I don't choose to shutdown Directory Opus when closing the last lister. I assume that leaving the program in the background makes it launch faster and has other advantages.

It's faster and things like system-wide hotkeys work without any windows open.

It also means you'll get what you want if a second window is open, so it's definitely preferable.

Glad it's working for you now.