I can't select multiple rename presets and assign to a group. I have to select them one-by-one.

[ul][li]I second that. Dragging and dropping presets into groups would be nice.[/li]
[li]Also no multiple selection possible for adding to favorites.[/li]
[li]Collapsing and expanding the groups makes grooup items disappear. They show up one by one when hovering the mouse.[/li]
[li]I like to see single clicking a preset makes it active. Now I have to double click.[/li]
[li]In macro mode the extension should be in a monospace font too.[/li]
[li]Please add an option to pop out the script pane in a separate window (or at least place it beneath the rename options instead of to the right. The rename windows is very wide now.)[/li]
[li]When the script pane is visible, changing a preset changes it's content. When the pane is hidden and a preset is changed the content stays the same which is confusing when showing the pane again.
Also when re-opening the rename windows the same problem occurs. An previous script is shown.[/li][/ul]

[ul][li]You only need to group the presets once and, having done a very large list myself, it was pretty quick with the existing methods. We may add more ways to do it in the future but for now our time is focused on getting an initial version out.

[/li]
[li]Multiple selection for adding to favorites is not needed: You can add to favorites by simply clicking on the star icons to the left of each preset, which is as quick as selecting them would be.

[/li]
[li]Single-click to load a preset might be a problem if you need to delete it without triggering any scripts inside of it. Other than that, maybe it would make sense, I don't know. Double-clicking seems OK to me, though.

[/li]
[li]You can't macro-edit the extension column so I don't see any reason to display it monospaced. Monospacing is used with macro-editing because you need to be able to see everything line up.

[/li]
[li]Rename + script window is wide, but so are most monitors these days. (If the script was in a separate window, where would you put it, other than next to the rename window?)

[/li]
[li]If you load a preset, that presets script (or lack of) should be loaded. You'll be warned if the current script had been edited in case you don't want to lose it. That should be the same whether the script panel is open or closed. If you're seeing something else, what are the steps to re-create it? There could be a bug there, or a misunderstanding.

The script should be blank/defaulted when opening a new Rename window, unless you are opening it with a specific preset, in which case it should show whichever script was saved with that preset.[/li][/ul]

First four bullet points I agree/understand, although multi select would be nice when organizing groups after an upgrade to 12. That's the moment when the biggest part of reorganizing has to be done.

Most monitors are wide but not all monitors are. Mine are so fitting the window on the screen is not a problem. What is, is working on the right side of the screen. I like to center the window I'm working/coding in. So I would place the script window in the center. Moving the rename window to the left in a way that the new names preview part remains visible will also do the trick.

Unfortunately, I can not reproduce the problem with the scripts. I think I was doing things wrong. Should I encounter errors again in the future than I'll report.

New little bug: The assign to group submenu collapses to the left instead of the right (toolbar and context menu).

Anyway, the rename window is an improvement over the previous one in version 12.0.5. For me it's not a showstopper anymore.

New little bug: The assign to group submenu collapses to the left instead of the right (toolbar and context menu).

I am not sure what this means. Could you post a screenshot or more details? 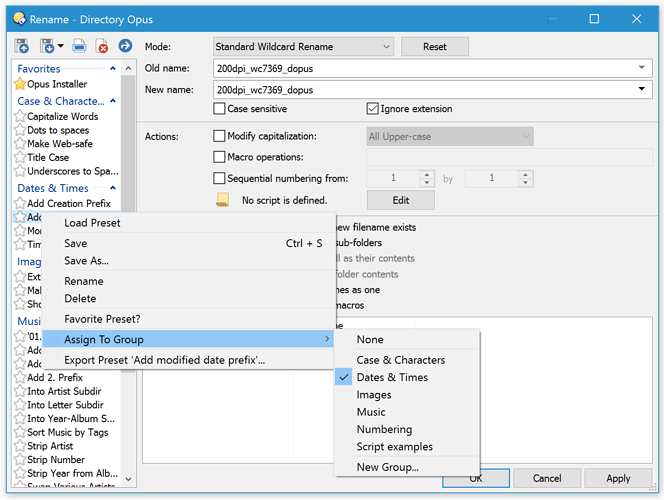 The menu is a standard Windows Menu object, not one of our custom ones (since it doesn't need to be), with all the layout done by the system itself.

If it's doing that, I would try disabling anything which modifies normal Windows look & feel to see if it is involved.

(This is assuming the menu isn't opening near the right edge of a monitor, with the Rename window behind it straddling two screens. Menus try to stay on the monitor they opened on.)

There's a setting in Tablet PC settings that controls this, see sevenforums.com/tutorials/78 ... -side.html for details.

Thanks for the link.
I had to set the option to left handed although I'm right handed. Anyway, problem solved.

[*]Single-click to load a preset might be a problem if you need to delete it without triggering any scripts inside of it. Other than that, maybe it would make sense, I don't know. Double-clicking seems OK to me, though.

Personally I prefer the Opus v11 single click: it is much more convenient as it quickly shows what the effect of a preset.
That said, I have no renames with a script within the rename panel.

Yes, the single click action should be the one you use the most which is selecting a preset and not renaming one. That can be done by right clicking or a button.

Personally I prefer the Opus v11 single click: it is much more convenient as it quickly shows what the effect of a preset.

+1
Single clicking seems more natural in that panel. Consider, for instance, if you have to compare the effects of five consecutive presets... Instead of single-clicking or moving through the list with arrow, you have to double-click each one -- a bit of a chore on a laptop's touch pad.

As a heavy user of rename presets, I would prefer a single-click.

Note: I had missed this topic and made a fresh-post about this by mistake. Thanks Leo for pointing this out, please feel free to delete the other post.

Any chance the single click to load a preset will return?

[Merged from another thread]

Inspired from a user in the German forum I suggest, that choosing a rename-preset (on the left) should possible with a single click.

Or is there any reason, why double click is needed to switch between presets?

[Merged from another thread]

You are not the only one who wants that.
Read some more here:
[url]DO12 - Rename Panel Management]

The developers give some reasons why it should not be possible. But with some keyboard modifiers or right mouse button option these actions, like renaming, can be done whilst keeping the left single mouse click for selecting the preset. Selecting a preset is what we do the most so it should be a single click action.

Let me add to that. Due to need for the double click one cannot walk through the list using the arrow keys and at the same time see the preview.
I did make the mistake by navigating with the arrow keys and pressing enter to select that preset. The ENTER did indeed select the presets but also applied it and closed the rename window.