Look forward to your reply.Thank you！！！

Which kind of documents is that happening with?

What is the action that causes the problem?

What makes you say Opus is causing the problem? If the file dates change, that doesn't imply it was Opus that changed them, unless they change when you do something in Opus.

If it is happening with saved email files, there is a known issue with part of Outlook or Windows which causes that, but it also affects File Explorer and it's not a bug in Opus (or Explorer). We don't know of any similar issues in Opus or in anything else.

EXCEL documents, word documents, etc. when I open them for view but do not modify them, and then close them, their access time will be synchronized to the creation time and modification time. When I don't use DO, this phenomenon doesn't appear. Is it the setting problem of the software?

Opus does not view Office documents. If MS Office and its preview handlers are installed, Opus can use those to display Office documents in the viewer pane, but it's never Opus itself opening or displaying the files; Opus just tells Microsoft's preview handler to open open inside the Opus window, and it's ultimately Office itself which displays them. You should see the same thing when you use File Explorer's viewer pane.

If it's happening when you double-click files, Opus is even less involved there. (If it's that, which program is actually opening the files? What happens if you do exactly the same thing from File Explorer?)

otherwise，I want to know the software have an option to prohibit modification of the creation time of the document.

That would not be something Opus itself is doing.

We've seen shell extensions that are part of other tools trigger things like that. The one that's well known is part of Outlook or Windows but only affects email files. Maybe there's a bug in another component which is similar for Office documents.

It could also be triggered by a script add-in, if you're using script columns and the script is doing something it shouldn't.

If it's happening on a NAS, another possibility is that some NAS misbehave and update timestamps or attributes when they shouldn't (e.g. changing the modified time just because a file was read). That's fairly rare these days but can still happen.

You won't see this happening with Office documents and a vanilla install of Opus and Windows. It is not something Opus itself is doing.

To demonstrate, I've gone to a folder with a load of old Office documents and their timestamps have not changed: 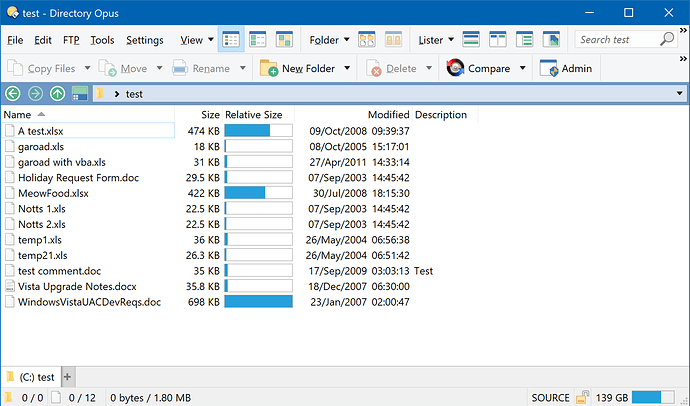 I think you still haven't said if this ever happens when you do the same thing in File Explorer. If it happens there as well than that would add to what I am saying.