Dragging in the UI stops working sometimes with Wacom tablet

Greetings Gurus, I've had this problem before but I confirmed it is a Dopus bug today.
While dragging (left mouse button held down, over files to select them in a lister or the lister scrollbars) the mouse suddenly stops moving and I have to initiate dragging again. When it occurred today I immediately switched to explorer (gasp!) to see if the issue was Global on the OS (Win 7), It wasn't I was able to hold drag indefinitely without issue in Explorer. The issue is intermittent though and I had it occur many times previously. I restarted Opus immediately to see if it would clear up but it didn't and then Opus started functioning normally after a few minutes. Weird.

I use a Wacom tablet 100% of the time. Come to think of it the next time it happens I'll see if the issue occurs with the trackpad as well. Please resolve.

Try turning off "Use Windows Ink" in the Wacom settings. That has fixed similar problems other people have seen:

It's not an issue in Opus as far as we can tell. Opus doesn't even know you're using a Wacom tablet instead of a mouse and simply processes mouse input messages the same regardless of the type of device sending them. But the Wacom drivers seem to have an issue when Windows Ink is enabled in them.

Windows ink is definitely off, I turn it off as soon as the OS is installed.

Off in the Wacom drivers or off in Windows?

It's the option in the Wacom drivers that seems to fix things for other people (not just things in Opus; it seems to be a general issue).

It's off in the Wacom dialog and in Windows.
I know what I'm experiencing. Intermittent issue.

Opus just uses and responds to the standard mouse messages. It doesn't know anything about your tablet. If the Wacom drivers aren't emulating mouse messages properly then you'll need to complain to Wacom about it.

I've had similar issues, but with me it was the Wacom-pen point. Replaced it - didn't happen again. But - it happened OS wide. So you might be onto something here.

So it might be that your tablet, pen OR driver loses 'connection' and registers a stop event or something. What panels are open? Preview? Maybe it takes away focus? Maybe another background proces takes focus? If you want me to test something I can.

Could you also film what you are doing? It would make my testing more accurate

I've turned off these settings in Wacom Driver BTW: 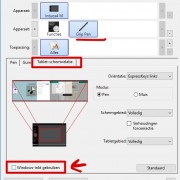 And this (all in Dutch sorry). 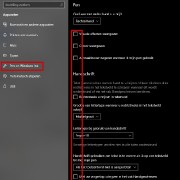 Film of me drag and dropping:https://gofile.io/?c=WMZtsU

Very curious as to what is happening here

StrangerNL is right, start by changing your nib. Then have a look at this very useful video: