Example as shown below:

You can do even better- assign shortcuts to jump directly to a drive.

its already done, its different alternative..
since i have many drive letters (might be add up to X:) & shortcut to folders, sometimes its kinda difficult to remember all of them..

You could add the drive-buttons (settings -> customize -> commands tab -> all commands -> drive buttons) to your lister context menu.
Then you just have to right click a lister and select your drive: 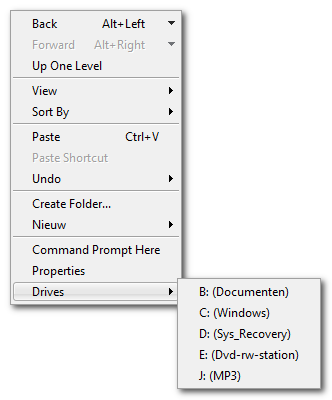 Another way: [Shortcut popup menu. is it posible?)

thanks for the replies, but for me, all of them are not fast and easy to do. I'm a "keyboard" user coz i'm a programmer and of course, clicking menu is the last choice,but i'm prefer not to.anyway, creating those like Christiaan shown arent flexible for removable media, because the newly drive/partition could be mounted in different drive letter.

Christiaan's suggestion was to use the Go DRIVEBUTTONS command which generates the menu for you. The drive letters are not fixed.

(...) creating those like Christiaan shown arent flexible for removable media, because the newly drive/partition could be mounted in different drive letter (...)

I didn't add the drives manually. I just added the command Go DRIVEBUTTONS=lettersbeforelabels to the context menu.
The DRIVEBUTTONS option acts as a dynamic command that adds buttons representing all disk drives present in your system.

You could use this tool http://lifehacker.com/5302200/menuapp-is-a-tiny-portable-application-launcher-menu from lifehacker. If you set opus to replace explorer than the folders/drives should open in Opus.
In addition you could assign a hotkey for the tool to quickly get the dialog if that helps.

But did you really try the suggestion Leo gave you above (a floating toolbar)? It gives you (almost) exactly what you want:

2. Switch to the Toolbars tab and create a new toolbar called FloatingDrives (or whatever you want). This will be the menu that pops up.

3. Setting the Type to No Frame might look best.

4. Add a new button to your toolbar with the code:

5. Now go back to the Customize dialog and this time go to the Keys tab.

7. Click OK in the Customize dialog to save your changes.

Now when you press ALT-F1 the toolbar will appear, floating under the mouse pointer (and press ALT-F1 again to close it): 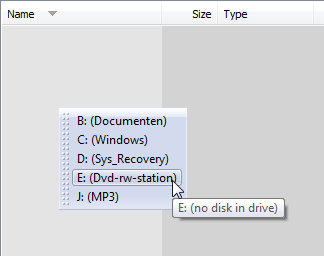