I use Dopus on my desktop & laptop. One of the major folders I work in is the dropbox folder. This folder is on F:\ on my desktop and D:\ on my laptop.

I usually modify the Dopus settings on my desktop and back it up using the Dopus backup & restore fairly frequently. However, if I want to enjoy the changes on my laptop, I have to go through the favourites & aliases modifying all the paths to from F:\dropbox to D:\dropbox, every time I make changes.

I thought that this issue might be solved by setting a win 7 environment variable for the location of the dropbox folder. This would work great as I would only have to change my existing bookmarks and aliases once. However, I had the following questions and possible feature requests:

I have to create the fave, then re-edit it to apply the correct path. Additionally, there is no option to add the alias simultaneously, so that has to be also edited. Thus adding a fave is going to involve a minimum of at least 3 cumbersome steps. Is there any way around this?

You could configure the Prefs BACKUP command in a button and use a {dlgstring$} prompt to determine the target folder.

I'm not sure I understand your solution completely. It seems that it is only setting which folder the backup configuration file is being stored? Could you elaborate if I have misunderstood please?

I'm not sure I understand your solution completely. It seems that it is only setting which folder the backup configuration file is being stored? Could you elaborate if I have misunderstood please?

Apologies. That would be because I failed to read your question carefully!

I also use Dropbox to share settings between desktop, laptop, and VMs. I have a button that saves my favourites using nomenclature which includes the source computer name, user name, and a current timestamp - e.g. MyPC-AB-20130821-121314-favorites.ofv. Another button is configured to restore a selected saved favourites (ofv) file. My Dropbox is always in the default location so in my buttons I simply reference the Dropbox folder as /profile\Dropbox.

That sounds interesting. Could you hopefully share the buttons code if it's not too much of a bother?

No bother. Note, however, that the process is quite complex. This is due to the need to deal with Opus eccentricities and timing issues. I have annotated the buttons and will attach the button and user command code as a zip file.

Here is the SAVE button and its associated User Command 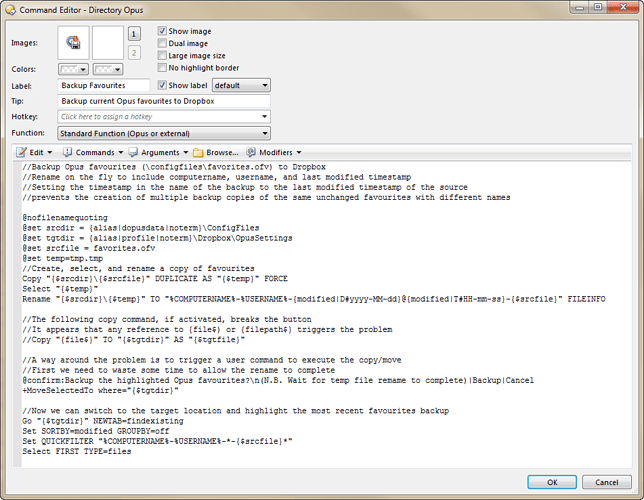 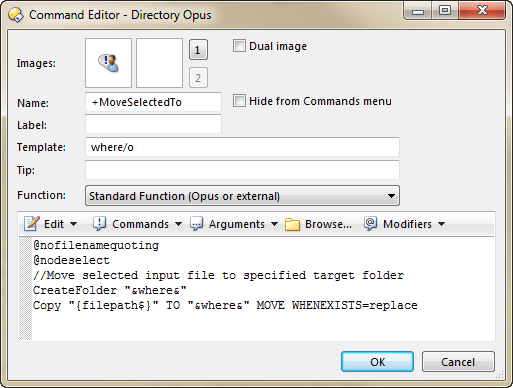 This is the RESTORE button and its associated User Command 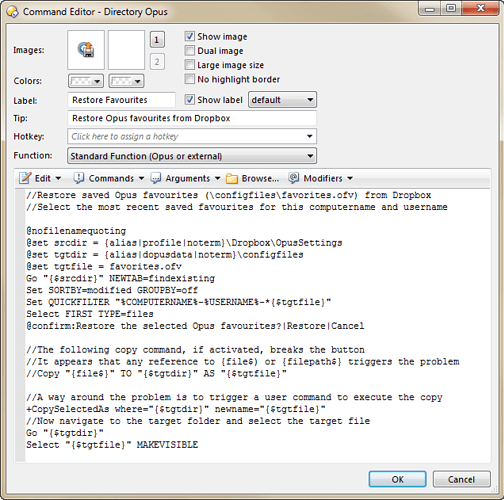 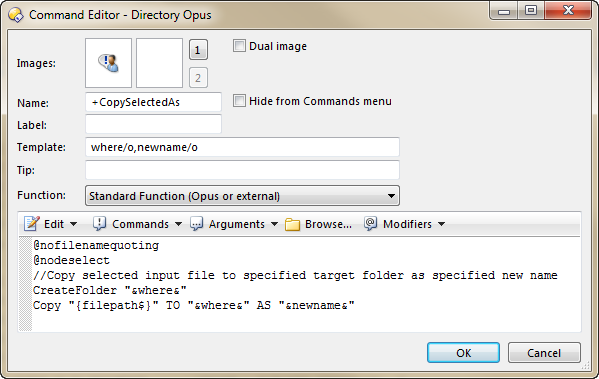 //The following copy command, if activated, breaks the button
//It appears that any reference to {file$) or {filepath$} triggers the problem
//Copy "{file$}" TO "{$tgtdir}" AS "{$tgtfile}"

//A way around the problem is to trigger a user command to execute the copy/move
//First we need to waste some time to allow the rename to complete
@confirm:Backup the highlighted Opus favourites?\n(N.B. Wait for temp file remame to complete)|Backup|Cancel
+MoveSelectedTo where="{$tgtdir}"

no worries man. no wasted time as I did not get the chance to test it yet. glad you caught it!