I'm curious as to why the following names would be sorted in this order...

I've attached a screen shot so you can see that the lister is, in fact, sorted by name. 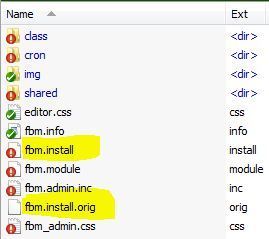 I'd guess that this might be relevant, but I don't know how.

Opus sorts files with the same stem together, ordered by suffix. Therefore the three "fbm" files appear together, in order of suffix .info, .install and .module.

Opus sorts files with the same stem together, ordered by suffix. Therefore the three "fbm" files appear together, in order of suffix .info, .install and .module.

Why does it do it that way? Seems to me sorting by name should be just that... sorted by name from first character to last.

Is there a setting somewhere to control this behavior? If not, please consider this an official request to add that option?

Maybe to some people, or in some cases, that "makes more sense". That's why I think it should be added as a preferences option, so that those who like this method of sorting can select it, but those of us who would like for Dopus to sort the way every other program that shows dir trees does can have the choice to do so.

I can see why Jon believes the sorting "makes more sense" as he's a programmer. For us non-programmer types it's disconcerting & a preference option would be most welcome.

So then I'm with the OP... as I've found it odd in the past as well. Why shouldn't both fbm.install and fbm.install.orig be sorted together since they are most like one another in name except for that pesky ".orig" extension...?

Only one of them has a ".orig" extension, the other one has a ".install" extension. The names are different.

My IDE (Netbeans) appends .orig to the end of files that are "reverted" to a previous revision - so those are two versions of the same file - and, as I mentioned before, all other programs that show the contents of folders show those two files together, that is, in order character by character from beginning to end.

But I think perhaps you are missing the point... I'm not trying to convince you that my preference is best and that Dopus should be changed to ALWAYS show files that way. I'm simply saying that we have different opinions about how those files should appear, and that Dopus should have options so each of us can select our preferred method. And, judging from the post by Innuendo, there seems to be others who share my opinion.

Are you really arguing against making this a preferences option?

Are you really arguing against making this a preferences option?

Not at all, I've just been explaining why it works the way it does.

I assume that the fact that I see "GPSoftware" under your profile name means you are with GPSoftware, correct? Do you think this might be added as an option to Dopus? If so, what might be the time-frame?

As far as I know, I haven't actually had a case where this has made a difference, but I think I agree with ExTexan.