Thank you. Best script ever for my large archive of files that need renaming.

How would you use this in Opus 12 beta? Thanks

In general, the same way you would have used it before. If something doesn't work, report it as a bug in the beta (via Help & Support, not here) as we aim not to break existing rename scripts.

This script works fine in DOpus 12 as it is. But I'm going to add support for having the settings in the rename dialog instead of in the script.

While I'm at it I was thinking of renaming it. The From File name isn't very descriptive. Especially since I suspect most use the clipboard feature now (I certainly do). From Clipboard is an obvious choice, but does anyone have any other suggestions?

It's often hard to come up with good names for these things.

How should the text file read? I mean, what is the format?
Oldname, newname comma separated ? (like an export of Excel)
with/without column headers?

It's just a list of new names, which will be used in the order they're listed.

You can do the same thing in Opus 12 using this menu in the rename dialog, by the way: 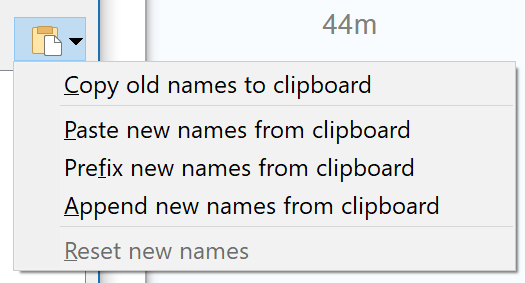 (If the menu is ghosted out, turn off the macro option to the left of it.)

Thanks.
I noticed that feature, but regretfully for one reason or the other it does work out the way I would like, hence I was seeking for an alternative way.
Probably I might be doing something wrong.

In Excel I had to sort the files on their total pixel size, then added 'Delete_ ' or 'Keep_' to the name.

After that, resorting on original name again.
I would expect the sort order would be the same as initially, but it turns out that Excel is sorting names differently then. Seems that Excel is taking other matters into account.

For example: in Excel the first 'old' name starts with a ( character, whereas in Opus the first character is a '

So, I was thinking of a method to import a list (e.g. a csv) with old and new names.

This seems very convoluted. If you want to rename based on pixel size you could use a script to do it automatically.

Workaround
to avoid different sorting in Excel, I calculated total pixels (W-pixels multiplied with H-pixels), but did not sort on that, as I did initially. Instead applied a formula
like if total pixel size=x, add keep_ to the name, else add delete_ to the name.
So the list kept the same sort order as Opus.

About the 'total pixel'-size thing, that's covered the other thread. We probably have different things in mind.

Anyway, it is solved now.
Sorry for the confusion.

oh, BTW, I don't know my way in scripting, regretfully so.

It seems like you don't want a "Total Pixels" column, you just want a way to sort "small images" from "large images". This is called an XY Problem.

If you just ask what you actually want to achieve we probably could have helped you much quicker.