Hello,
Our company started using Google's Team drive and Directory Opus see's the unlimited amount of data as full. The drive reads as 1 PB available but shows red and I'm unable to transfer files into the folders. Here's the error screen:

Here's a screenshot of my drives on the PC for reference.

How big is the file you're trying to copy?

7 gb. I should also state that using explorer I'm able to transfer the file without issue.

WIll it let you copy a file less than 4GB in size?

The main issue seems to be that the filesystem is reporting as FAT32, so Opus is blocking the file copy because FAT32 has a maximum file size limit of 4GB.

The bar is showing as red in your screenshot because the filesystem is also reporting it "only" has 79.5 GB free - this is a tiny percentage of 1024 PB, and the bar will go red whenever the free space is less than 10% of the drive size. Whether that free space amount is correct or not I can't say.

I can copy anything under 4gb, yes. The business plan is unlimited storage and the amount that I have allocated on my local drive, offline, is only 100GB.

Ok so sounds like it's just misidentifying it as FAT32 for some reason.

If you bring up Properties on the drive, what's shown for FIle system on the General tab? 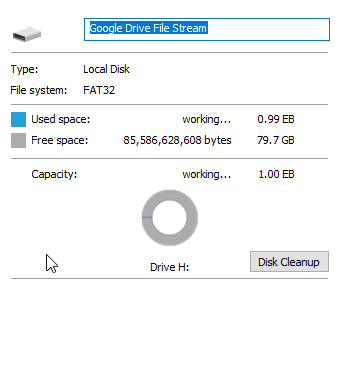 So it looks like for some reason that Google Drive reports itself as being FAT32.

Opus recently added a check for the 4GB maximum file size, to prevent attempting to copy files to (e.g.) USB sticks that will eventually fail due to exceeding the limit. This is what you're running up against.

I'm not sure what the solution is really, it seems odd that Google Drive would report itself as FAT32 when it apparently isn't.

I guess we could also check the size of the drive and assume that if it's greater than 32GB it's not "really" FAT32, although that just seems like layering one kludge on top of another

I mean.. if this is the only thing I ever have to deal with in terms of limits until Google fixes itself, I'm still overly happy and I'll forever tell new windows users to get Directory Opus before they do anythign else. =)

For some reason, they are really reported as FAT32. I don't use it myself, but updated the google drive from my supervisor and had a problem as well with the indexing of files made by Everything and Listary.

As it is not NTFS, had a lot of problem with real-time indexing. Hope they would fix this and move to NTFS.

In the next update we'll check the size of the drive as well as the reported file system, and if the drive is > 32 GB we'll assume it's not "really" FAT32 and allow those large files to be copied to it without warning.