Win 7 dir opus shows a hidden folder 'My Videos' under 'My documents'
How do I unhide that folder(My Videos) so I can remove it?

Is it a folder or shortcut? I have a shortcut to my videos/pictures etc in that folder and it has a "system" attribute. To change that you can press ctrl+b and have system and/or hidden unchecked and press ok.
But Im not sure if its wise to delete something that hase a system atrribute.

[quote="wskrol"]Win 7 dir opus shows a hidden folder 'My Videos' under 'My documents'
How do I unhide that folder(My Videos) so I can remove it?[/quote]

(If not, please try re-wording the question.)

The My Videos folder is not usually flagged as a system folder, so that probably won't help.

It's not usually flagged as a hidden folder either, but if the Hidden attribute has been set on the folder and the aim is to hide it, you want a slightly different command. (Or you want to set both the Hidden and System attributes, so it is considered a system folder.)

Or under Preferences / Folders / Global Filters: 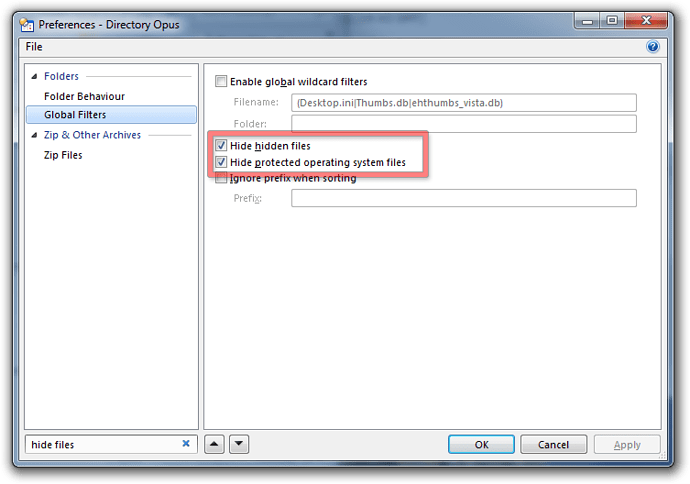 (The menu and Preferences options control the same pair of settings. The menu items let you quickly toggle visibility without having to go into the Preferences dialog.)