For some reason when I try to use the FAYT function on the active lister on DOpus 12.12 the filter bar won't open as in at all filtering will only start when I press any of the keys excluded here (O, S, F, G, H, V, M), in addition to this for some reason the hotkeys seem to be messed up in general, the default delete key for some reason if it's set as a system-wide hotkey only works on DOpus, if I highlight files on the desktop for instance the delete key will bring up the confirm delete dialogue on DOpus instead of for the selected files on the desktop.(If I keep the delete key as default on DOpus it'll make the desktop work as expected, but won't work on Dopus).

It sounds like at least some of the problems may have been caused by moving the Menu toolbar out of the lister and floating it as a top-level window, which will make the hotkeys in it system-wide.

Looks like you've turned the Image Viewer toolbar on inside the lister? That is causing a lot of the hotkey conflicts. Turn it off (it is only for the standalone viewer, not the lister) and see if any problems still remain.

I only have a toolbar called 'Menu' open in the lister itself, and the only other two menus I'm using are being used on the borders of the listers.

What do you mean by "the borders of the listers"?

Could you post a screenshot of your lister and any/all toolbars you have open?

Oh by the borders I mean the new feature in 12.12 where you can have multiple headers for the listers that are taken from the toolbars in place of the single toolbar when static headers are turned off. Here's the screenshot. 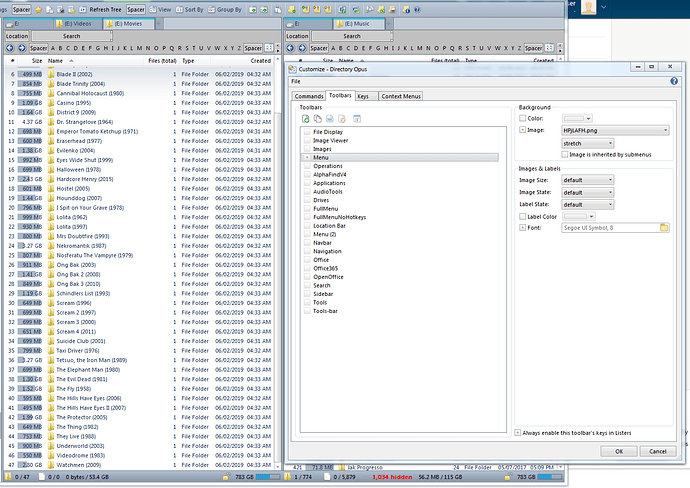 Select Image Viewer in the Toolbars > Customize list. Is "always enable this toolbar's keys in listers" turned on for it at the bottom of the same window? It should be off.

That worked fantastic, thank you very much.