Is it possible to add buttons to the "Confirm File Replace" Dialog? e.g. to add a button to call an external differ for the two files.

Not at the moment. (I've moved the thread to Feature Requests.)

Nearly 12 years later, I'd still like this feature. I requested it here: [url]<Compare> button in "Confirm File Delete" box]

The thing about this request (at least Norbert's example) is that it's not just about determining if the two files with the same name are different. It's about seeing what is different about them.

Any interest from the GPSoft folks in doing this?

I'm surprised no one else has piled onto this request.

Oh, we actually discussed that. Cannot remember in what thread or context, but having the possibility to diff on replace-conflicts is not something somebody asked 12 years ago the last time. o)

I leave my 1+ for this, it might help sooner or later. Wouldn't be the first feature implemented after a decade of requesting. o) Which does not imply it always takes that long. In reality it's quite the opposite, some things find they way very quickly, so please don't get me wrong. o)

Glad to hear Nosch and I are I are not the only requestors, Tbone. Thanks for weighing in. It seems so sensible to me and I know I run into the need for it over and over when copying files.

I'll admit to having that, "Wait...what's different?" feeling now and then when I was copying a file or three. Having a convenient way of comparing the two files would surely have been useful to me instead of needing to skip the file, go to a separate utility to do the comparison, and then deciding if I should copy-overwrite or copy-with-a-new-name.

I realize the utility would still be separate, but having an "extra action" scriptable button available to put into the dialog would make things much more convenient.

It would be nice if we could specify a "one-liner" for a file type, in addition to the infotip - it would get shown in the replace dialog where "Desc:" is.

I don't know what you mean, Tenebrous.

Now I understand what you were referring to, Tenebrous. Just needed to read it a couple times and look at the Confirm File Replace box.

In 12.3.3 we are adding the ability to define extra context menu items which are only shown when you right-click the files (icons/thumbnails on the left) in the Replace dialog. 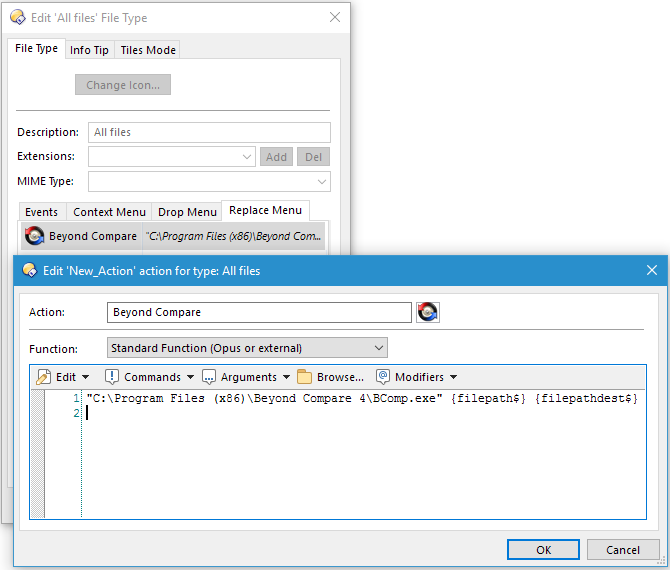 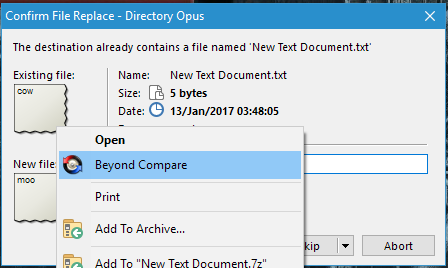 The commands can use {filepath} to get the file which was right-clicked, and {filepathdest} to get the other file.

So, if you send a diff tool both files, you will normally want to right-click the top file to ensure they are sent in "source, dest" order.

Commands don't have to use both files, of course. For example, you could add a menu item that copies the right-clicked file to a special location before it is either skipped or overwritten. Such a command would only use {filepath}.

That's excellent, thanks very much for that!

Leo, it looks like this is possible for files but not folders. Any plans to add a "Replace Menu" tab for folders in "Settings | File Types | | {Edit}?

Do you mean for when the Merge dialog appears?

Oh, I think I'm off base! Directories wouldn't show up in that box because it's "Confirm File Replace".

What happened: The "File Types" box in Opus had entries for "All folders" and "All files and folders" and I was thinking (erroneously) that the folders would show up in that "Confirm File Replace" box.

Nothing more to do here.

I love the right-click support in the Confirm File Replace box you've added in 12.3.3. I defined a "Beyond Compare" item for "All files" and it's incredible. Thank you.

The same dialog can appear for folders. Although it's called a different name, it's basically the same thing. So we could add similar for folders, if you want it. Not all diff tools support folder comparison but Beyond Compare can do it.

Whether it's useful in this context, I don't know. I'd usually compare the (sub-)folders before starting the copy if I was interested in a folder-level comparisons, and once the copy had begun I'd usually only care about individual file differences. But that's just me, and other people may work differently.

There's probably no real reason for us not to add it, since you'd still have the option of putting things into the All Files menu if you only wanted them on files.

How do I get that dialog to appear for folders, Leo? Is it controlled by a setting? When I copy a duplicate-named folder, it prompts me about individual files only. I'm doing a right-click drag and then choosing Copy. Maybe in some merge-y workflow?