How to read DjVu files (Was: Can't read djvu files)

Is there a plugin or a tweak I must do to properly read djvu files. Right now I only get Hexa codes.

(Edit: See below for solutions.)

Not that I know of.

Can you view them in Internet Explorer? If so then the ActiveX plugin might support them if you add their extensions to it.

If some points us to a library/API or documentation on the format which can be used to write a plugin then one might get written. Without that nobody can do anything.

Here is a link to the official site:

The code is opensourced so maybe someone can come up with an idea for the plugin.

Did you try adding its extension to the ActiveX list after installing the plugin?

I have tried the plugin. http://downloads.lizardtech.com/files/win/DJVUCNTL_61_EN.EXE

And added its extension to the ActiveX list.
But when opening a file with the activeX viewer the plugin gives the error box: [1-15002] URL 'C:\Programme\LizardTech\Lizardtech DjVu Control\Examples\general.djvu' does not contain a protocol prefix.

Thanks Nosh. I'll try and get this ActiveX control to work with the plugin as part of the re-write of the plugin that I will be doing in a few weeks' time.

I just added .djvu to the active x list, opened the viewer pane, and there was the DJVU content

The same company also have a Djvu Shell Extension pack which includes a preview handler that Opus will use:

The preview handler seems a bit nicer as you don't have to tell Opus to use it (Opus will use it automatically if it's installed) and it scrolls documents in a better way. That said, the Djvu ActiveX control has some features that the preview handler doesn't (e.g. a ruler to measure distances, options to rotate pages, etc.) 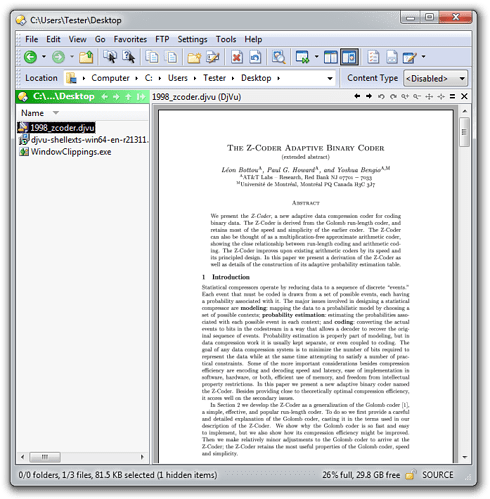