How to use the built in 7zip support for files with paths longer than 260 characters?

Is there a way to get Opus's built-in archive support to work with long file paths? The long path option in Windows 10 has been working fine in Opus except for archives

In what way doesn't it work?

Note that Opus supports long paths natively, and has done so for over a decade. The new Windows 10 gimmick won't make any difference to Opus.

I made an example screenshot. I tried both .zip and .7z and .zip worked fine.. I got an error when trying to create the .7z archive in a folder with a long path and also when I tried to move the files to a folder with a long path from the archive.
In the screenshot the I'm trying to extract the .7z to the right side which is a long path.
I work with long paths a lot and I'm currently going through tons of random files (about 800GB) from my old computer. There are a lot of .7z files because I have a lot of mods for games. The folder path on the right is 307 characters long. 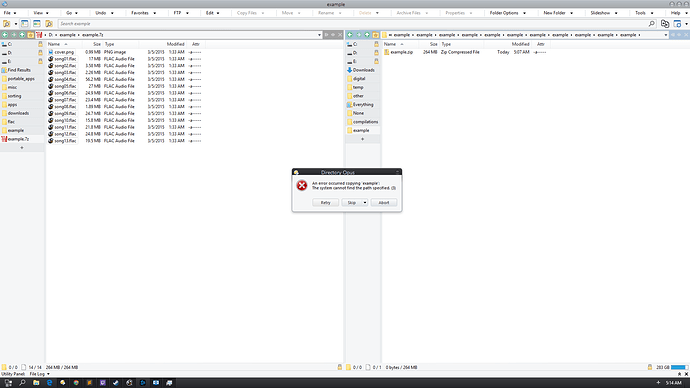 It's not a huge deal if I can't do it.. I was just curious if there was an easy fix that I don't know about.

The Archives plugin (which handles 7z, Rar, etc. -- but not Zip which is built-in to the main dopus.exe) doesn’t have all the very-long-path workarounds which are built into Opus itself. This is more an oversight than anything intentional. I had not noticed it had issues with this until it was mentioned fairly recently.

I plan to look into porting the very-long-path workarounds in Opus over to the Archives plugin in the future, but that's how things work for now.

Sounds good. Thanks for the replies.

One thing I was curious about that I decided to not put in the last post but kinda regret now is has there been a need for long path support in Opus? I've wanted that in windows for years and have only heard of it being added within the past year.

Opus already supported very long paths in the most critical places (copy / rename / delete, essentially; it's hard to guarantee literally everything will work as we can't always control for Windows APIs and third party libraries, shell extensions, and so on). That's probably 10-15 years old (off the top of my head).

Microsoft made a fuss about the change in Windows 10 but the underlying OS already supported it; the problem was just their own apps (like File Explorer) which are built on top of it. All they've done is finally start using what was there already themselves, to the best of my knowledge.