I have a question about Folder renaming speed and time

Thank you for your reply.

I have re-published an article again more detailed description, pictures and video.

Please take a look at it again, thank you.

Because I have to record videos about folder renamed, I want to post on forum let you reference.

Because nearly tens of thousands of folders, so I need a good file explorer to manage these folders.

And in order to facilitate management folders, I have categorized and coded.

Through the network recommend buying your company's products.

I'm using Directory Opus software has been for many years.

In addition to Directory Opus 10 no purchase, 8 and 9 and 11 were purchased full version.

Start using Opus 8 and 9, the operating system is Windows XP 32.

Due to work demands I must be open several Directory Opus windows、Word、Notepad、Internet Explorer...
at my taskbar to facilitate my comparison.

Although I open several Opus at the same time, but I rename a folder at once.

Previously used Opus 8 and 9 to rename, I was also open many processing software Windows on the
taskbar, and each folder has at least three layers.

However, folders renamed was very quickly,didn't delay and didn't have to wait.

When upgrading to Win 7 64 and Opus 11, folders renamed becomes slowly and always delay, I often have
to wait for a long time.

I am currently using the OS is Windows 7 64, and my OS hard disk and data hard disk are two separate
hard disks.

My data hard disk size is 1TB SSHD and no partition.

At first I thought it was a hardware level is too low, so I changed some of my hardware.

I repeated the test, no matter how many Directory Opus on the taskbar to open, even if I only open
a Directory Opus, folders renaming on the first layer and second layer are very slow.

Instead, a folder of the third layer is the innermost layer is fast renaming, which makes me feel
very strange.

I have attached diagrams for your reference, only adds a word of English "A" in the first layer and
second layer, rename must wait some time to complete.

I have recorded video files, but was not able to post on the Forum.

Is there a way in a video posted on the Forum?

Because my English is not good, I may not be very detailed expression of the problem.

So if you can see the video file would be clearer to my problem.

Because there are many folders must to rename, so shorten the time of renaming is very important for me.

Could you please tell me how to solve this problem?

I am looking forward to receiving your reply, thank you very much. 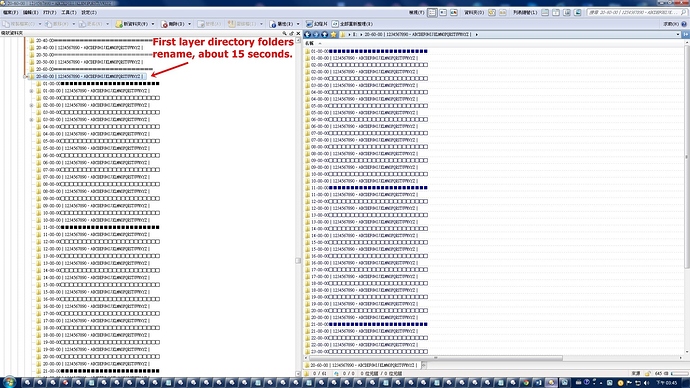 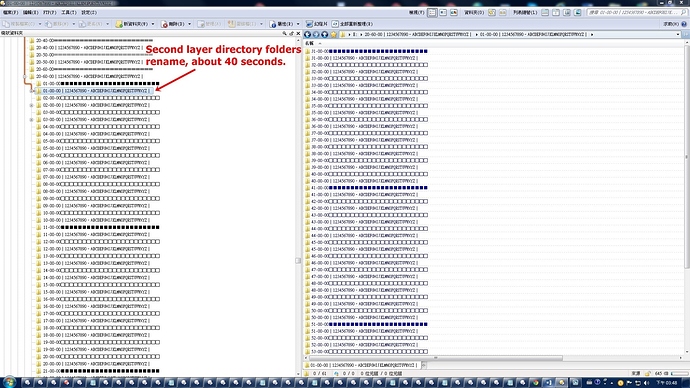 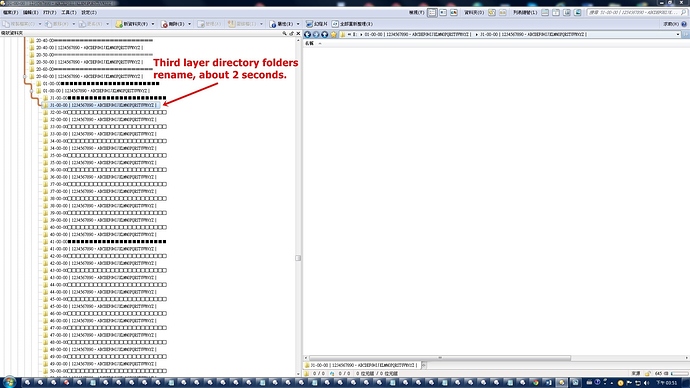 Or you can zip the video and attach it to a post, if it isn't too large.

Thank you for your reply.

I posted the video zip files about directory folders rename, please refer them.

For example, folder I only adds a word of English "A".

Is that happening in DO only? What happens if you rename these folders by using explorer or command line?

But if software programs were opened by Directory Opus also would freeze.

May be video less clear, but mouse cursor animated are going round in circles and also can move
the mouse.

But all Directory Opus Windows on my taskbar freezed.

But before using the Opus 8 and 9 are not.

Is there a way to solve this problem?

Ask the technical staff can help me to solve my problem?

Did you check and test these things, Leo asked for?

[quote]For example, are you only seeing this in certain folders? If so, what is special about those folders? Are they deeply nested? Is it the long names, or the characters in the names, that seems important? Is it only when there are lots of folders in the paths along the way (which will mean the tree has to do more work to find the folder to update)?

I have said that I have nearly Hundreds of thousands of folders to manage, so I have
coded and categorized.

Folders are put some information and nothing special, such as instrument files,
pictures, and some web data.

Each folder is independent, but each folder contains three to four layers of folders.

With the long or short file name does not matter, and no relationship with the character.

Because I'm using Directory Opus 8 and 9 not happens something like this, at that time
the folders has five layers, but no matter what layer the folders rename are very quickly.

But now using Directory Opus 11 in the first and second layers rename the file has
become very slowly.

However, the innermost layer folders (third or fourth layer) renaming was not affected,
are very fast.

For this reason, folders lessen to three layers, but first and second layers rename
folders are still slowly.

So I'll write this letter for you, please help me to solve this problem.

Would the technology department to solve my problems?

Would it be possible to send us a zip archive, or a text file, with all the folder names in it? Then we can try creating the same folders and renaming at different levels to see if we can reproduce what you are seeing.

One way to create the zip file would be to duplicate just the folders, as empty folders with no files in them, using Recreate Empty Directory Structure (recursive version), and then zip up the result.

Because I have several hundred G's files, so I attach simulation files, please copy themselves into
nearly tens of thousands and please opened more than 20 Directory Opus to simulate my working environment.

My problem is renaming a folder in second layer directories wait for a long time, please help me to solve
this problem, thank you.
Simulation files.rar (123 KB)

We've spent some time looking into this and may have found something, but still need to look some more. While we have not seen the same delays that you experience, we did find a bug that may be related. There is a partial fix for it in the beta released this morning, but a more comprehensive fix is coming, after further testing today.

[b]I have tried to install the 11.5.4 beta, but the problem about renaming a folder in second layer directories wait for a long time is still not improved.

In addition, after installing the 11.5.4 beta,file number order will be mess (Please refer to the accompanying drawings "Correct & Incorrect").

And attach the compressed file for you to test again, thank you.[/b]

"file number order will be mess" MIGHT be the same issue discussed at Filenames begining with underscore sort to end in 11.5.4.

The sort order in the beta is covered by the thread Bob links.

The current beta only contains a partial fix for the tree issue we found, not the full fix, as I said, and the issue we found may not be the same as the issue you are seeing, as I also said.

Please wait for more details & investigation from us.

Here's a video made using Opus 11.5.5 on a virtual machine with default configuration. (I also get the same results on my real machine with my custom config.)

I just realised there was only one window open when I recorded the video. I've done the same test with 20 windows open and had the same results. (Can re-upload a new video if you need to confirm that.)

This archive contains the full set of folders I used for testing, which was based on the sample folder names you sent earlier.

We have not been able to reproduce any of the freezes you are seeing. As you can see in the video, the renames are always processed almost immediately, at all levels in the tree.

Please let me know if you watch the video and can see anything that I am doing which may be different to your setup, or the actions needed to reproduce the problem.

If we're both doing the same things, then the issue may be in something outside of Opus itself. For example, shell extensions called to get icons for the folder tree, or various details in the file display, whenever you click on different folders and when folders are renamed. If one of those is freezing whenever Opus asks it to do normal things, then that could be the cause of the problem you are seeing.

If any network drives or junctions are involved then they can also complicate things and are worth bringing up.