If you look at the image below you can see how the left half of DO is setup. I want the 2nd side to be the same when it's opened. It would be nice if the Operations toolbar was hidden if the right side isn't open but I can deal with it as it sits now. However, when I open the 2nd side I want the Operations toolbar to be between the right file tree and the right files panel as it is on the left side. I've tried to drag and drop it there but it won't go. 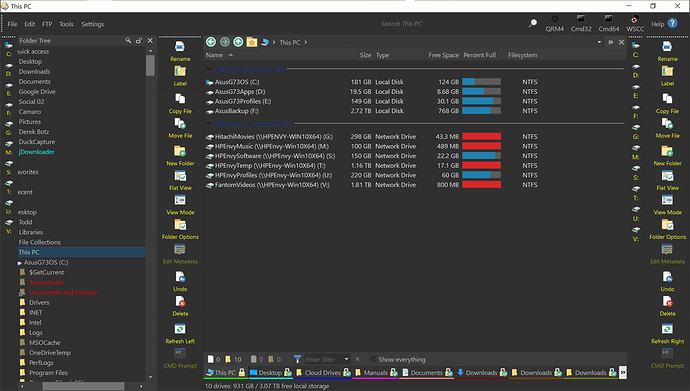 I was trying to Duplicate the tabs from the left side to the right side but you can only access the context menu (send to the right) of a tab if that tab is displayed and not in an area where the tabs that don't fit due to screen crunch are retained. It's not very handy that you can't do anything to those undisplayed tabs except click on them once they fall into the >> at the right.

Also, I like that you can color the tabs but I thought I was going to get an entire tab with the color not just an underline or you could color the name of the tab would be awesomer.

A nice to have would be to have the folder colors on the tabs also apply to the folder tree for easy locating.

Also, I had to go through and lock all the tabs on the left because when I went to a 2 sided display the tabs were lost except for the one you were on unless I'm missing something. You can see the Mega as the only tab listed when I didn't have them locked on the left side of the 2nd image. There doesn't seem to be any way to access the "show everything" checkbox if you had your screen crunched that far. Sometimes I can get at it by going right up against the seperator between the 2 sides but not always. I'd also like if the check box and the File Filters weren't mutually exclusive. There's lots of times this has proven unworkable like your trying to display a file that doesn't appear in a particular format but you still don't really want to see all the files you want to see all the files with a .txt extension of all the non-group files. The only time I really want to see All Files is if I'm trying to figure out why a format isn't working properly so I can see counts by grp:

Another nice to have would be a color applied to the different Files selected by the file filter (ie all text files in green, all word docs in blue, etc)

I really wanted to copy the toolbar with the tabs on it but I don't know its name and I don't see anything when I go into customize that would be a toolbar that's checked and not already one I can identify. The Tab Toolbar is not checked which is what I would have expected this to be at the bottom of the files and yet when I check the Tab Toolbar it puts something at the top of the lister seemingly below the menu but it's blank for all intense purposes.

I attempted to edit the Windows 10 Dark Theme but it's not user readable. I thought maybe I would be able to figure out the name of the Tab Toolbar or even edit things within the theme to create easy left-side right-side toolbars 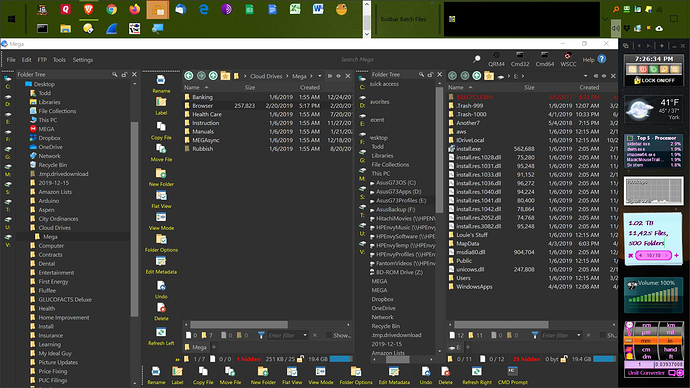 Finally, when you open 2nd lister from a place that you click a link to a specific folder or file you don't get the "default lister" you get a lister with a single tab shown, the tab of the folder of the file you clicked to open the lister. I don't know if that's what you intended but that's what's happening. When I took a screen shot of it to upload I had to either go through the folder tree to find my screenshot folder or open another lister to get my default tabs so I could easily get to the screen shot. 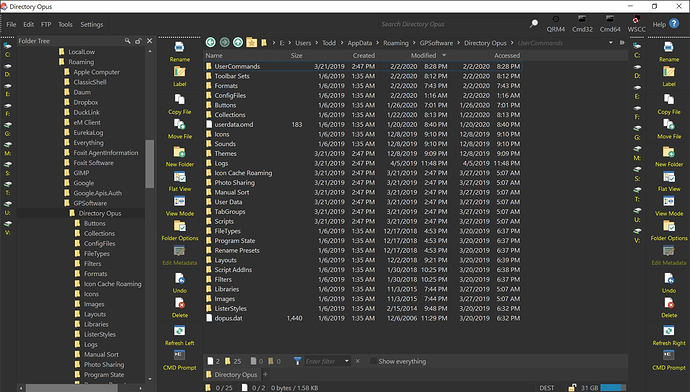 A similar area is the Quick Access. There's nothing there until you double click on it and then it brings up an white background overlay that just plops right in the upper left corner which I think I had to click twice yet again to get the actual folders to appear in the file tree and expand them. I almost thought for a second that the folder colors were propogating to the Quick Access but I'm not sure why the last folder has a color it doesn't match it's color on the Tab Toolbar so I'm not sure why or where that's coming from. I would have sent a pic of the overlay but I'm not sure how to revert back to before I expanded the folders. I don't know how long that stays in effect if it's for the duration once it's open until the computer is shut down or some time limit. It doesn't seem affected by opening another lister. 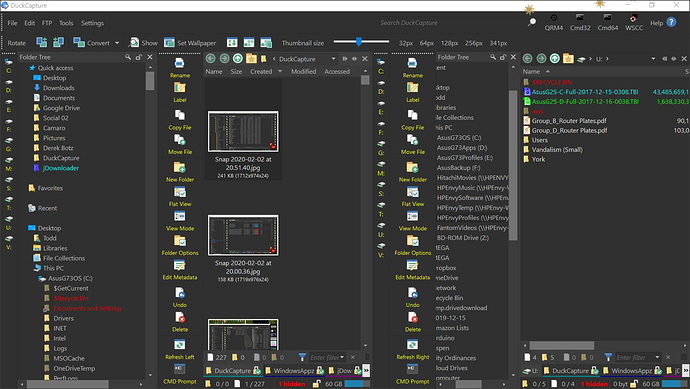 In general, please ask only one question per thread, unless your questions are closely related. Similarly, if your question is answered and you then have a new, unrelated question, please post it in a new thread and do not add it to your existing th…