Nothing has changed in this part of Opus for a while, and since it's also intermittently working in Explorer, I'd say the problem is either in the phone or on the PC as a whole.

MTP in Windows, Android and iOS is not that reliable at the best of times, so rebooting the phone and PC may also help in case something is stuck.

Some of the suggestions here may also be worth a try, for those that apply to iOS as well:

About MTP: Opus includes built-in support for the MTP protocol, which many phones and tablets (typically Android ones) use to allow file transfer between the phone/tablet and your PC, when both are connected together via a USB cable. Some people fi…

I did find a workaround: Plug in the phone (I did not start iTunes first, and it did not start). In Opus, right click the iPhone icon. Select "Import pictures and videos". Follow prompts; pics did import.
After the import, I could see the DCIM folder (which has all pics on iPhone) in Opus!!

Not starting iTunes is always a good idea in my book.

"Import pictures and videos" is not part of Opus, FWIW, but something something else (maybe Windows or iTunes) has added to the context menu.

Interesting that it works for cmarcus (or maybe not anymore) - which workaround is this please?

Currently Explorer and DOViewer show pics for a few seconds (also thumbnails) but then the files can't be found anymore.

Works not anymore after a few seconds (click other pics then back to this): 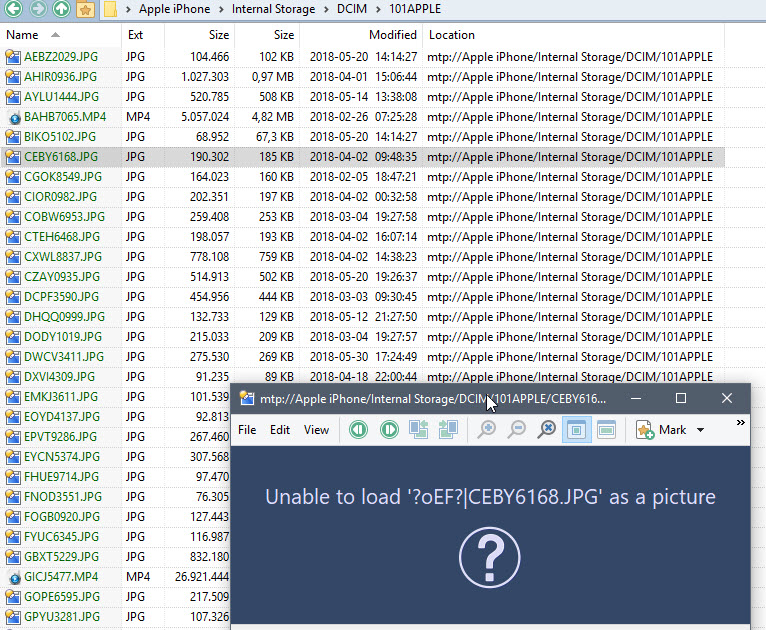