On Windows 10 64 bits. Since version 12.3 and also on 12.4, when I right click on a .mp3, the program freezes and closes after 2 seconds.
It happens the same thing when right click on a .mp3 when it does not stop and that one selects "add to the list of the Windows media player".

That problem is most likely caused by a shell extension something else has installed on the system.

Here is how to track down the cause:

With xnview I disabled all my shell extensions and it does the same after reboot.
Re-installation the same.
I can not find the version of Dopus 12.2.8 finally the last in 12.2 since it worked very well.

Xnview is an image viewer; do you mean ShellExView?

Did you reboot after disabling extensions?

Are any crash dumps created?

Yes i'm sorry, Shellxnviews.
Yes yes I restart then.
And any automatic crash dumps
In attachement the event observer when that happens. 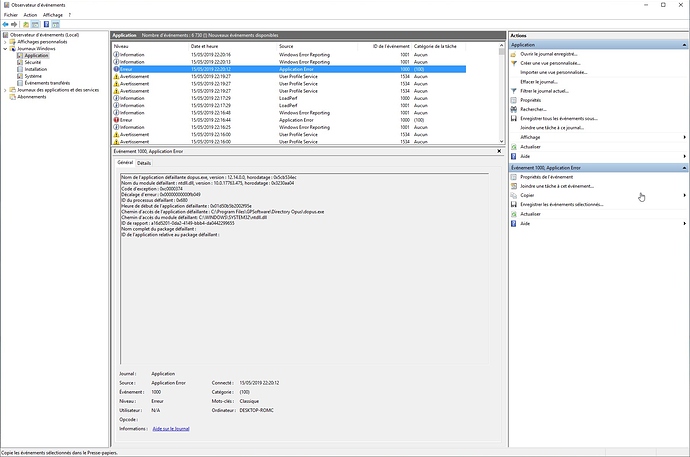 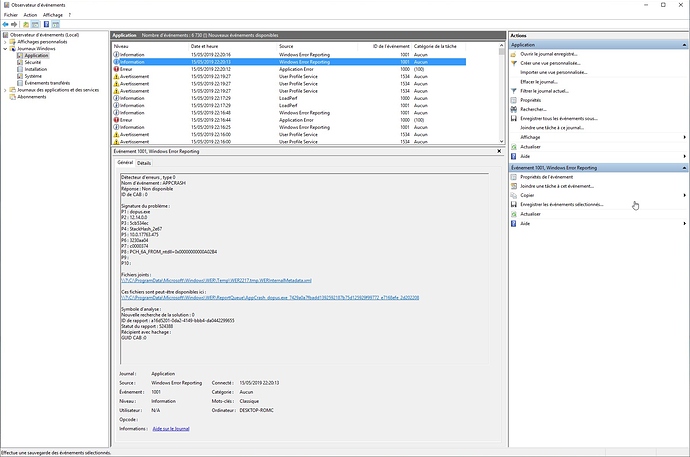 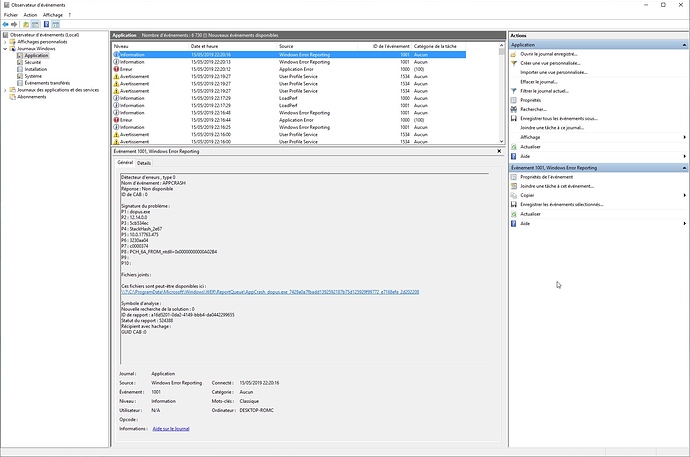 Here's how to find the crash dumps (also linked in the main guide about right-click issues):

Automatic crash dumps: In the event of a crash, Directory Opus will usually create a "dump file" in the temporary folder which contains information that may be useful in diagnosing the cause of the problem. To locate these dump files: In Opus or …

Those will provide much more information than the Event Viewer logs, if they exist. (Some types of crash prevent them being created, but they are usually made.)

Yes I understand but there is no created, I can only create one with dopus but it weighs 223 663 Ko

Please send it (or a DropBox or OneDrive etc. link) via private message or email and we'll take a look.

Is this a dump made while the program is (partially?) crashed? You would not usually be able to make a dump on the process if it had crashed so badly that it could not generate a dump file automatically, as the process would not exist at all. Or have you restarted the process before creating the dump? (That won't be as useful, but could still be useful just to see which 3rd party DLLs are still being loaded.)

Not actually, the process closes when it happens, I have to re-open the program to dump so I agree that it will not advance much. I said that the program starts at startup.

It may be the same issue as in this thread, which also has links to older installer versions if you want to try that.

Hi, i'm having a lot of crash with directory opus 12.13. i followed the information here the "quick fix" was not working so i did the procedure with debugview. it's doing this by rick clicking on a .Mid file (midifile), or .Mp3 (must try other f…

In the end, the issue seemed to be caused by something else on the machine, not Opus itself, but it's not entirely clear. We don't have any other reports apart from these two threads.

When you used ShellExView, did you disable everything and reboot, or just things that looked worth disabling?

Yes I disable everything except microsoft extensions.

Oh nice thread !! it's my problem !
lol OK I have to do a cross on windows media player

It may not be WMP that's causing it. From your screenshots above, it looks like something is corrupting memory. The effect of that could vary with different components being loaded or not loaded (or the order they are loaded in), since it affects memory layout and might change the corruption from something harmless (or harder to notice) into something that instantly crashes the process.

Checking whether it still happens with WMP removed is worth a try, though.

No more crashes after uninstalling wmp

I think I'll be formatting my computer sometime in the future, maybe it will not do it anymore if it's an isolated problem.

Hi ROMC, maybe we have the same issue, and the fix work the same, but as leo said, it's maybe not WMP the issue, but maybe something else related to it, and uninstalling WMP stop the crash.
Maybe it's something corrupted in windows, or maybe it's related to hardware or software. can you tell which hardware component you have ?
i'm feeling a bit less "alone" here lol, but we're still only "two".

my computer is like this. I'm a musician and video editor, so my whole computer is built around this activity but i do other normal "stuff" with it. Office, 3D video software, Photo editing etc... (even if i had one or two video games installed, i don't and never play).

hardware : CPU I7-700 (not K).
Graphic card : Old Zotac GT 640 (Vga output on a CRT).
Soundcard : UR22 Steinberg.(not the MKII version).
Mini ITX motherboard Asrock H270M-Itx/AC
Avermedia TV HD 2 (usb Key to receive / Capture TV).
Keyboard : iRig Keys 37 Pro IK Multimedia (nothing to do with the crash, i only turn it on when i work in Cubase using a USB hub with switch on/off)
Seven CMC-Series Steinberg Controller.
a Wacom Intuos 5 Tablet Pen/touch as mouse.
A Counter Design Shuttle Xpress.
an Yamaha U1 Acoustic Piano with Midi feature (Usb Midi)

Main Software used are Vegas Pro 16, Sibelius and Cubase Pro 10.
Resonic player Beta as main mp3/Audio file player.
Lot of audio plugins + other software of all kind, Ilok and E-licencer installed.
see if my any chance you find a common point between my setup and yours.

DO was crashing as well with midifile, AC3 file, Wav (16 or 24 bits) so all the audio formats read by WMP. but No crash with Videos, no matter if videos are including Mp3, AAC, DTS or AC3 files, it was never crashing (video player : MPC-BE (it's an alternative version to MPC-HC). VLC is as well installed because it's used by some software, but i don't use it.

I use the last version of Windows 10 x64, that's mean i have the october 2018 update. i installed it immediatly when it has been available, despite all the issues which happened to lot of users (I never had one) and that made microsoft to delay the update for lot of users.

my system has not been re-installed since March 2017, i own a retail version of Windows 10 Pro, and it was a Clean and Fresh install, not an update from Windows 8.1 Pro.
I'm pretty sure (but can't confirm this) that if we reinstall Windows 10 from the beginning (and not as a repair system), the issue would go away (or maybe not) ahha !

Yes I disable everything except microsoft extensions.

That would not have disabled the Windows Media Player extensions, since they're Microsoft ones. Might be worth a try, since it seems to be involved.

Leo, we have a common point, we're both french ! i just noticed it by watching ROMC catpure, he runs the french version of Windows !