I dont think these are possible ?
Listed in order of importance (- to me!)

thanks for the indepth response Christiaan!

[quote="Christiaan"]1. You could create a hotkey that toggles a i toolbar[/i] with this (menu)button: PREFS LAYOUTLIST[/quote] I had tried to give this a shortcut without success but the toolbar/button works

the only disadvantages are ~ it doesnt give a clean list - it shows two on a line if it can ~ you have to press the hotkeys a second time to get rid of toolbar.
My 'dream' was to be able to open a list of saved layouts the way one would normally open a file from e.g. a word processor.

[quote]
2. Do you mean the name of the Layout?[/quote]Yes

[quote]3. As far as I know only the default lister updates automatically when closing a lister (see 5.)[/quote]yes, so I'll request this one.

[quote]4. When you create a new layout, just deselect: Settings > Preferences > Listers > Layouts > Close all existing Listers ...[/quote]my point is that the default is confusing for new user (of Lister Layouts)

Problem with this is it updates Default based on the last lister you close - which in my case is very much unpredictable - naturally especially on shutdown. I wanted to be able to choose a saved Layout and make that layout the default lister without having 'worry' about it !

it shows two on a line if it can

In the Customize window, select the toolbar and turn on the Vertical checkbox.

it shows two on a line if it can

In the Customize window, select the toolbar and turn on the Vertical checkbox.[/quote]
even with that turned on, it will put two shorter lister names on the one line if they fit (the line being the width of the longest layout name)

I dont know how popular these saved layouts are amongst users, but for me they are one of the big attractions/qualities of DOpus. A big convenience and a huge timesaver as well - hence the thread...

Can you post a screenshot of that? It sounds wrong but maybe I've misunderstood.

Here's a section of the toolbar (full width is shown). Toolbar is frameless, floating, with Keep Vertical selected.

Are you sure Vertical is turned on?

It's called just Vertical, not Keep Vertical. Have you turned on the Keep on Top option above it instead by mistake?

Also, turn on the frame temporarily and try resizing the window so it's a tall as possible. That'll fix it if you get multiple columns of buttons, but from looking at that screenshot it's doing a horizontal layout as they're not arranged in columns at all (the widths aren't fixed).

You're right Leo -
Vertical got turned off somewhere along the way (I'm 100% sure I had selected it btw). It's definitely a little buggy though, the combination of floating toolbar with vertical selected and a hotkey to toggle - when I reselected vertical, it showed as a completely horizontal toolbar (floating). I messed around with the settings (Vertical: on/save off/save etc) and eventually it showed correctly as vertical.

Could the hotkey to toggle it have affected the settings ? - is this correct:
Toolbar NAME=ListerLayouts STATE=float TOGGLE

at any rate, thanks as ever for your help
I'll try doing same again tomorrow with a new toolbar and see if it's just a bad hair day or a findable bug...

Ok, I also created a new toolbar (screenshot below). And a hotkey: toolbar name=ListerLayouts state=float toggle
But it's always horizontal, even with vertical checked. But I noticed that I can manually resize the toolbar to show the items vertical (and you probably have to check Lock Position?): 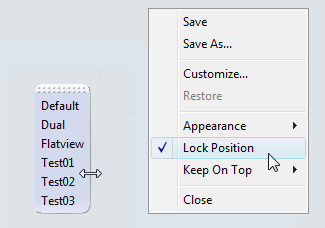 [quote="Christiaan"]Ok, I also created a new toolbar (screenshot below). And a hotkey: toolbar name=ListerLayouts state=float toggle
But it's always horizontal, even with vertical checked. But I noticed that I can manually resize the toolbar to show the items vertical (and you probably have to check Lock Position?):[/quote]
apologies for long delay in reply & thanks for checking that out Christiaan -
It does seem to work if you resize it - it holds the new proportions & doesnt show more than one item per line.
Lock position is not necessary.

posted to support as:

a) option that titlebar of window show the saved lister name

c) I would love to see (in the default install) the ability to open a Saved-Lister-Layouts dialogue box/window (with list of saved layouts), similar to the way one would open a file in another programme, i.e. shortcut opens list. I actually made a floating toolbar that shows via hotkey but (1) it was quite a challenge to figure all the aspects (2) there were problems with the floating toolbar - it initially shows as horizontal instead of as a vertical list in spite of having 'Vertical' ticked - resizing sorted this problem.
~ I guess my point is: I believe that this is something that could be very attractive a new user - it would be nice if they could access it directly (saved layouts are certainly one reason I'm sticking with Dopus)

d) option that a layout will auto-save on closing of window, ideally on a per layout basis!