Where can I do that? If more people request it, it will be more likely that they implement it in next version

Sorry for bumping this old thread, but I have to ask: does new DOpus 9 support FLV files as movies?

hi, if you are using vista 32-bit, you can install the "vista codec pack" from here: msfn.org/board/Vista_Codec_P ... 66826.html (no virus, spyware, bothersome conflicts)
and opus (as well most other video software on your pc) should be able to show almost any file (incl. .flv, .rm) in viewer pane or viewer standalone; i tried just now the .flv to verify as working.

Which plugin ends up playing the FLV files if you install those codecs?

As far as I know the movie plugin ignores the FLV file extension but it's possible that the ActiveX or MultiView plugins pick up the file (without as good a user interface, though).

for me the opus movie player plugin is playing the file. the activex plugin lacks the features and i have multiview turned off. it is the same player used when i play an .avi. also, that particular codec pack gives opus the ability to show a thumbnail for almost any codec type.

just don't try to run .ogm in the opus viewer, for me it freezes the viewer (but maybe that's because the file was on a stressed network drive).

ok, i just saw on another computer with vista + vista codec pack + opus, opus is able to run a random .flv in both the viewer pane and using d8viewer.exe in standalone player, push enter to fullscreen

Could you show a screenshot of the FLV playing in the viewer pane?

.flv isn't in the movie plugin's list of extensions at the moment so it would be very odd if that plugin is playing it.

If I rename a .flv to .avi then it does play fine in Opus, but not if it's leave as .flv.

mluna, I have all the necessary codecs to play flv files (flv splitter and ffdshow) and DOpus viewer pane shows the file as text, like nudel said

here is .flv in opus viewer 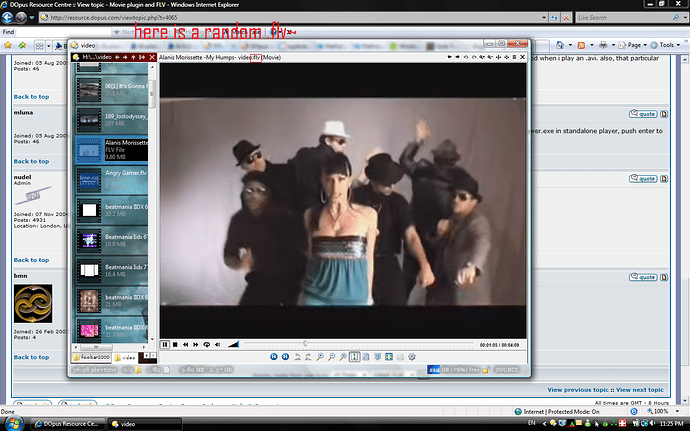 here is an .rm. i'm not sure, but i think it may be the particular codec pack. vista codec pack v444 is really well made i think, not buggy 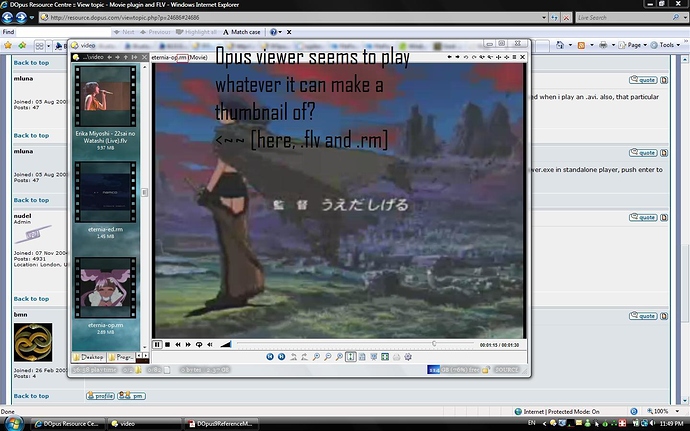 Thanks mluna. That's definitely the movie plugin alright. I wonder how that's happening! I'll take a look at what's in the codec pack you mention to see if I can work out which component is enabling playback of these formats, and how.

After a bit more digging, and talking to Jon, it turns out to be very simple!

As well as a hardcoded list of extensions which the Movie plugin will try to play, it will also try to play any filetype with a "PerceivedType" of "video".

If a format plays okay in Media Player but not in Opus then you probably just need to add a PerceivedType value to the registry for that extension. See the screenshot below for an example with .FLV -- after adding that I can now play FLV in Opus fine. Yay! I've wanted this for a while so it's my turn to say thanks.

I'll add this info to the general movie playback FAQ as well.

Video FAQ updated. I've added a .reg file that people can use to easily set things up for FLV and several other formats (MKV etc.) so that they work in both Opus and Media Center. I've also included links to some of the required splitters and the FFDShow codec.

[HOW TO: Enable/fix playback of various media formats in Opus)

That's great news nudel! I'll try adding those registry settings when I get home and I will post back then. And of course thanks to mluna as well!

oh, i didn't see all that on the second page.. this is great news! opus makes a nice movie player now.

It works ok in my system, thanks!

BTW, although FLV files work ok now (thanks again), I'd like to suggest to movie plugin developers to make the list of supported extensions configurable (like ActiveX plugin for example). It will be easier for newbies to configure that in DOpus GUI than editing the registry. Could that be possible?