Moving a lister forces it into box on desktop

I have no idea what's going on here. I think maybe my daughter messed something up, or maybe I did inadvertantly...

I have a default lister setup that I always use as a starting point. I used to be able to open listers and then drag them whereever I wanted on the desktop, but today it started doing something I've never seen before.

I'm sure this is some "feature" of DOpus or Windows 10, but I don't wan't this. How do I change it back to the normal operation where I just drag and drop listers where I want them without resizing or forcing them into one of two positions?

That doesn't sound like anything Opus does itself. Does it happen with other programs (e.g. Notepad)?

It kind of sounds like the Windows 10 "aero snap" feature although with that you have to drag the window to the edge of the screen to have its size set automatically.

You can turn that function off through the system Multitasking settings if you want to try that.

Another idea is to see if you have anything installed or updated recently that modifies how windows size and position. Check your Programs and Features control panel to see what's been installed recently.

Yep, Notepad does it too!

I found the culprit! I recently purchased a 32" Dell gaming monitor that came with the Dell Display Manager app. I assumed it was some crazy DOpus or Windows 10 setting that inadvertantly got turned on, possibly by a keystroke combination.

I've included two screenshots of this craziness that has now been resolved. Whew. 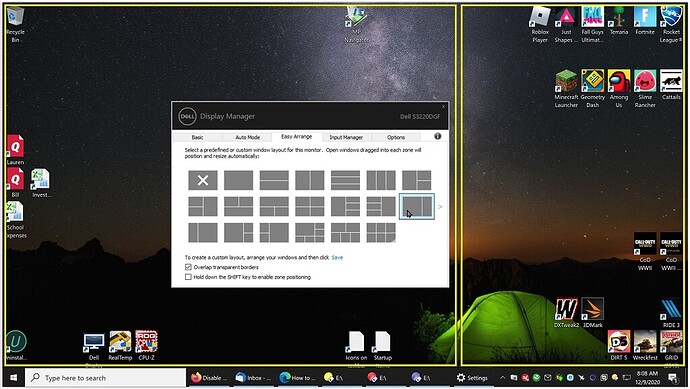