Hello folks and good evening.
My first post.
I have downloaded the trial and so far have been BLOWN out of the water. How in the world could I be such a power user and NOT know this software existed?!
Ok... Publicly identified newbie status aside...

Before asking here, I did a search throughout the forums and via Google. So unless my keywords just weren't perfectly tailored, I could not find the answer.

Thank you, and very glad to be here!

For now you can only view album art in the file display itself (not the viewer pane), when in thumbnails or tiles modes.

Editing album art can be done to some degree by creating buttons/hotkeys/menus which use something like Album Art Aggregator (see this thread or my WmaAlbumArtist tool (see this thread). More integrated album art editing might come in a future version.

AFAIK nobody has requested (at least here on the forum) that the viewer display album art, but it wouldn't be difficult for someone to write a plugin which did that, or you could send GPSoftware a feature request to see what they think (but their list of existing suggestions is very long, of course, but it doesn't hurt to ask).

Gotcha!
Ok, Leo. Thanks a ton for a very fast, yet complete response.

), It looks like DO is set to play mp3's right out of the gate. Yet when in any mode (images & filmstrip included), a play button isn't seen. Where is it hiding? And has anyone created a way to double click, or right click or whatever click to play it as well? NOT just via a player on the Viewer Lister Pane (or where EVER its hiding.) A mouse click(s)Within the program i mean, and not a right click to open via a 3rd party app...

File/File Commands/Play Sounds will let you play the selected mp3 or other sound file. You can also configure your mp3 file type in Opus so it does whatever you want it to when you (left/right/middle/double) click on it. Almost everything is customizable in Opus that's why so many of us love it.

John? Where is this set up at? The only thing I found that comes close to touching this in the manual, is that I need to install a 'Viewer Plugin'.
Im assuming that a viewer plugin to play the mp3 will differ from the viewer plugin already in place to view the mp3's tag info.
Am i on the right track?

I read a post where Leo stated that Media Player needs to be installed for it to work, and it is. So it just comes to a configuration somewhere for it to actually do...

Wish I could edit my post instead of addendum's...

But in my Preferences>Plugins>Viewers>ActiveX + Preview + Office + Web, every audio/video file .ext is listed, including .mp3. So still uncertain why it won't play.

Ok, if I go to Preferences>Plugins>Viewers> and UNCHECK MP3 Format Sound File, it will NOW play the file (via quicktime?!) in the viewer pane, but NOW no longer shows any tag information.

Is this a case of you get one or the other, but not both (Play audio AND show tag info)?

If the ActiveX viewer is used to show MP3s then it will generally mean it hosts Windows Media Player, which doesn't support tag editing. If you turn off MP3s in the ActiveX viewer they will fall through to the Opus MP3 viewer which does support limited tag editing, and may also be able to play the file depending on the codecs you have installed (basically, Opus doesn't play MP3s natively, but if there's an MP3 codec installed then it should be able to play them via the Windows multimedia APIs).

Do you want the selected MP3 to play in the viewer pane or do you just want a quick way to play an MP3 (e.g. by double-clicking it)?

Leo, I want to be able to sift through my music library via opus; select a song via a single click (reserving the double click for its third party player); view its tag ingo on viewer pane while simultaneously listening to it. I don't specifically need to see the player on the preview pane, but I don't want a third party app popping up to play it and removing the focus window away from Opus. I have a vast music collection which is why I am loving opus so much.
Never before have I been able to browse and flatten folders to view my entire collection with such ease.

So to simply left click to have it play (as its doing now via Apples quicktime for some odd reason (my systems default mp3 player is winamp. I have all audio codecs installed via K-Lite_Codec_Pack_590_full.) while viewing its full tag info in viewer pane is what I am after.
If I need to edit multiple tags, I will take them into Tag & Rename. But for single tags, Opus is Dopus! (Sorry. couldnt pass that up!) Unless, of course I need to edit the album art as well. In that case, its Still Tag & Rename (for now! hint..hint..)

Makes sense. For single-click playback you'll have to eschew the tag editor in Opus, at least for the time being.

If QuickTime is being used it's because your setup has the MP3 files falling through to the ActiveX plugin (which is what you want), which then finds QuickTime as the registered handler for MP3 files (which you probably don't want

QuickTime tends to take over everything and in recent versions has made it more difficult to stop that from happening. (It'll also mess up viewing of standalone PNG files in IE.) That's one of the reasons I'll no longer install QuickTime or iTunes outside of a virtual machine, and one of the many reasons I pray daily for Cthulhu to take Steve Jobs.

There should be an easy fix if you want Windows Media Player to handle MP3 files in the viewer panel instead. If you assign those file types to Windows Media Player (as described at the top of here) it should restore their ActiveX association with it. You can then re-assign the formats to WinAmp (or whatever you want to handle double-clicks) without affecting the ActiveX association (since WinAmp does not provide an ActiveX control).

Oh, something else that may interest you, and that I had forgotten about until now, is using the WMP Preview Handler. That will show you album art in the viewer pane and let you play music via the viewer pane. The downside is you have to click the Play button in the viewer pane after selecting each file (so it's not that different to enabling the default tag-editing plugin in Opus, except you get album art instead of tag editing, and the play button is a bit bigger and easier to push). 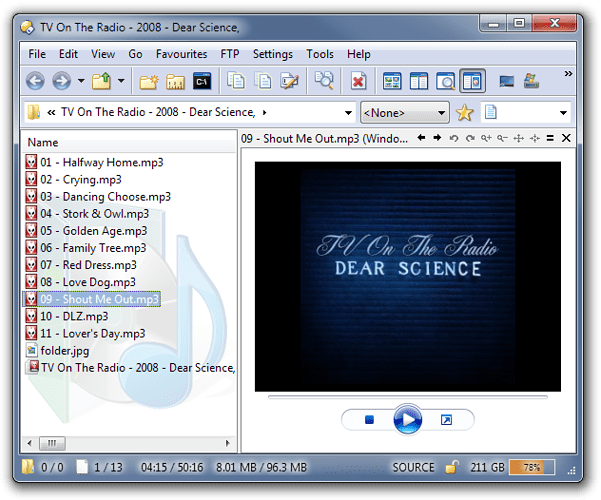 If you want to try that, go to Preferences - Plugins - Viewers, configure the ActiveX... plugin and turn on the checkbox highlighted in the screenshot below: 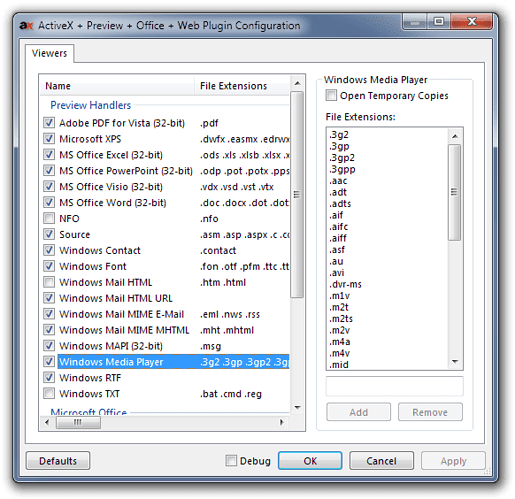 (A warning will pop-up when you enable the WMP preview handler, since it's disabled by default. You can ignore that. Also, the preview handler is only available on Windows Vista and above.)

Thanks a ton, Leo. Sorry for slow response time. Been a bit under the weather. Will check out all you said when im a bit more than 50%.