Is there anyway to stop the window below popping up on startup? We are running Citrix WEM which loads the profile after Opus has started and could do with this not popping up as Opus loads as normal once the profile has loaded. 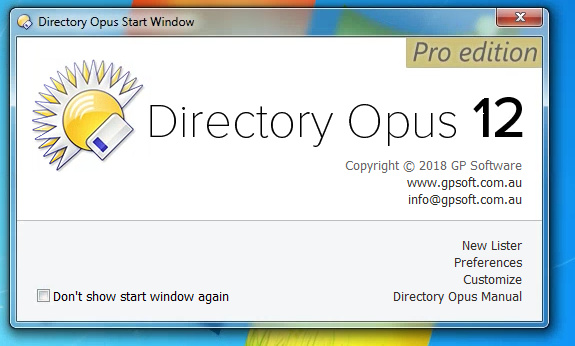 Not knowing anything about Citrix my first attempt would be to check the box in the lower left corner.

Is it possible to launch Opus after the profile is loaded? (Or to set it not to auto-launch at all, if that makes sense with WEM; I'm not familiar with the details of it, beyond the very basics.)

If Opus launches before the profile folder exists, there will be a lot of configuration options which will always be using their default values, not just this one.

If WEM launches applications before the profile directory exists (or has been copied over, depending on how it works), wouldn't that cause problems with a lot of software?

It doesn't cause any issue for any applications it just appears that Opus starts before WEM loads the profiles. We might have to take it from running on startup and launch a task to delay start it then.

The box is only appearing because of when the profile is being loaded which doesn't help ticking the box.

If you turn off Preferences / Launching Opus / Startup / Launch Directory Opus automatically on system startup then that should prevent the Start Window from appearing.

That is assuming Opus is launching due to that option, and there isn't something something else causing Opus to launch either directly (e.g. a script explicitly running dopus.exe) or indirectly (e.g. something launching a folder, with Opus set up as the default file manager).

(That option creates, or removes, a shortcut in the Startup folder, which would only be run once the desktop/shell is launched. I'm surprised if that is happening before the profile is ready, but not familiar with how WEM works, so that may be normal. In fact, the Startup folder is usually part of the user profile, so this is potentially odd, unless you're launching Opus via another method.)

(If there's also a shortcut to DOpusRT.exe /dblclk, for the desktop double-click functionality, that should be fine to leave there. I don't think it depends on anything from the user profile until someone double-clicks on the desktop to trigger it.)

With Opus not running at startup, it will still function the same as before, just with a slight delay the first time one of its windows opens.