(September 2020 update: CR3 support has been added to the built-in plugin in current Opus beta versions. You may not need Microsoft's extension at all now.)

While Opus comes with the Raw Camera plugin, you may find Microsoft's codec supports some camera models better (or vice versa).

You can get the codec from the Microsoft Store. At the time of writing, it requires Windows 10 1903, and was just updated to support the CR3 files some newer Canon cameras produce.

Edit: It turns out the CR3 update is only for Windows Insider build users at the moment, but presumably for everyone in time.

Edit 2: It is now available to everyone.

Thanks to @ForzaAndy for the tip!

From the description:
[…] The current version of the extension supports a long list of cameras, however some Raw formats like .CR3 and .GPR are not currently supported. […]

I think the description hasn't been updated yet. Did you try it?

And - if You scroll the Microsoft Raw Image Extension page down, You can read:

It's reported to work here, after a recent update. You could try asking @ForzaAndy in that thread:

Great news: I just checked and was able to download an update to the Raw Image Extension by Microsoft (from the Windows Store). With the update which I believe just became available, I am now able to see the CR3 preview image in Explorer/Director Opu…

I'm not sure what could be different @Mani
I've had the RAW extension for quite a while and have been looking to see an update for many months and 1st time I saw one was the other day. After the update, I suddenly could see my CR3s.

The most recent review gives us a clue:

I noticed the word "slowly."

Bummer. Hopefully can be ramped up. I am the Andrew that they responded to there

Mine is still on the January version, too.

Miracle! I can now see the CR3 in DOpus (as Minatures, in the Preview Pane too as Miniature), in Windows Explorer I can see the miniatures and with a doubleclick open in the MS Viewer "Fotos"

If you disable the Opus Raw plugin, double-clicks should open them in the same thing as in File Explorer.

You can also explicitly launch the Windows 10 Photos app on a file, if needed:

Yes, thanks Leo. I use already IrfanView for CR3 for, but its nice to see the Thumbnails in DOpus; now I can see what picture I will open.

One issue I've noticed: in Windows Explorer, I see a large/high quality image for the thumbnail/embedded preview but in DO I see only a very small version in the preview pane. I've attached screenshot showing what I mean. Is there a way to get the nice Windows Explorer preview in DO? I almost never use Explorer now!! 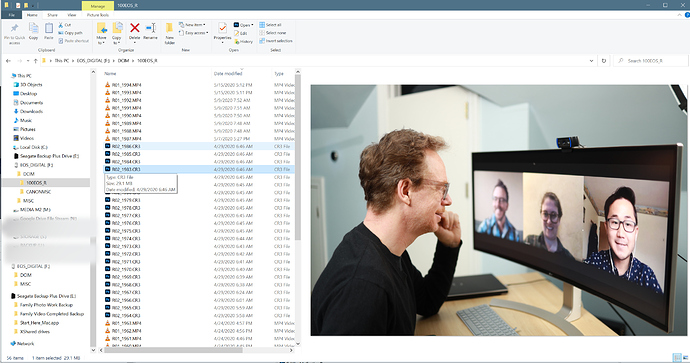 We'll improve that in the next update so that the preview is full size.

Could you also make it work in the D8Viewer please? I just hate Photos from MS.
Thx!

I'm looking in to updating the raw plugin so we have native CR3 support, which should be even better.

You can try the new CR3 plugin in the beta we just released: Directory Opus 12.21.3 (Beta)

Any chance to give us EXIF info for Canon R5 files as well?

That's on our list, but is somewhat dependent on metadata library we use.