Every time when Directory Opus is started, the Release History window opens. This happens since update 12.7 and is very annoying. I even reinstalled Directory Opus, but it did not help.
Please fix this.

Type /dopusdata into the location field. There you should see a userdata.omd file.

Something is preventing Opus from updating that file.

It could be that something has messed up the permissions on your profile folder, or set things to read-only. Another possibility is that a misguided anti-virus is blocking it.

All the files within that folder should normally be accessible, and the issue will be something outside of Opus, either running on your system or due to the configuration of the system (e.g. file/folder permissions).

I'm seeing something similar that just started with 12.7. The first launch after system startup always pops the Release Notes. Quitting and relaunching does not. the userdata.omd file has full permissions for the user I'm logged in as. What should be present in that file to stop it from displaying the release notes?

I have last_version_low="0" last_version_high="786438". Quitting and running as admin also has no effect on that. I guess it's looking somewhere else so that it only pops the release notes the first time it's started after a reboot?

Are you sure you're fully exiting Opus? That may be a red herring.

Did you check that you can save changes to that file?

Something is blocking changes to files in the user profile directory for a few people recently. We don't know what but it isn't Opus. Either something has wrecked all the file/folder permissions or antivirus is blocking the changes.

OK. Making sure that all of Opus is not running does result in the release notes being displayed again when Opus starts. Access is also blocked when trying to save the change manually from another program, regardless of Opus being running or not, Using OpenedFilesView on userdata.omd reports that it is open by the System process (pid:4). To go further down that rabbit hole it looks like I'll need to install the WDK for Windows 10. The only antivirus that is running is the one built in to Windows 10.

System (pid:4) holding a lock on a file often means it's being locked by something accessing the file over a network share.

It could also mean other things, but you can check that possibility by right-clicking the Start button, choosing Computer Management, and then from the tree choose Shared Folders > Open Files and also check Sessions to see who/what is accessing the machine. 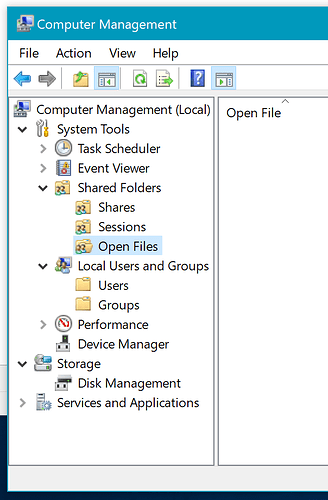 I figured it out to the point where at least my problem is now solved.

Restarting in Safe Mode left userdata.omd editable in notepad. Restarting normally and then disabling all my startup items in task manager left it editable. Going through the process of elimination by selectively disabling startup items eventually led me to f.lux:

Download this app from Microsoft Store for Windows 10. See screenshots, read the latest customer reviews, and compare ratings for f.lux.

All pretty odd, but now you should be able to try it yourself if you want.

I've encountered same problem, had to exit Microsoft Store application ShareX to be able to modify userdata.omd. Restarting the ShareX didn't relock the file. But restarting OS did. I have uninstalled ShareX Store App and reinstalled it traditional way through chocolatey and problem is gone completely, considering @FionaA experience I'm led to believe Microsoft Store is to blame where problem manifests with autorun apps or something along those lines.

If either app is blocking other software from writing to config files, I'd complain to the app authors. Not sure why those apps would do that but they definitely shouldn't be doing it, and the authors would want to investigate if they are.

It's also possible there's a weird interaction between having Store apps running and your antivirus, perhaps. (More likely if you're both using the same A/V.)

It turns out this is a bug in Windows 10, and f.lux and the other apps that can trigger it (in conjunction with Opus, and some other software) are not to blame.

We have a fix/workaround coming soon, although it's really something Microsoft need to fix as it affects other software as well.

A fix for this issue has been written and will be released shortly. We finally managed to reproduce the problem today, which let us start analyzing exactly what was going on. We can conclude that while installing f.lux and some other Windows Store …