I would like to be able to remove entries from tabs such as Edit and Tools. Items like "Select by Pattern" or "Upload to ImageShack". I have 11.11. Thanks.

Do you mean to remove them from the folders context menue? You can edit the menues in -> settings -> tools -> all files and folders or ... -> folders, which should contain thise entries. The right click menues of the tabs themselves are not editable.

From "FIle, Edit, Tools, etc." I think we are talking about the toolbar menus.

See here for how to edit them:

Yes I meant the toolbar menus. I attempted to edit them per the instructions above but I am unable to find the entries I want to eliminate. Apparently you cannot edit the context menu of the toolbar tabs. Thanks.

"The context menu of toolbar tabs" is mixing up three different things that don't normally go together, so it's unclear exactly what you are trying to edit.

You can edit the File, Edit and Tools menus on the toolbars using the instructions I linked to. If you want to edit something different, a screenshot might clarify it for us.

I have attached a screen shot. I would like to be able to remove "set as desktop wallpaper" and "Upload to ImageShack". 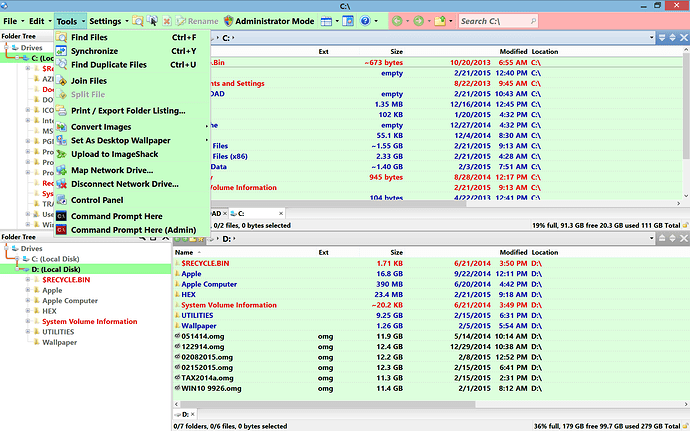 The page I linked to explains how to edit those menus. You just go into Customize mode, then open the menus, right-click the things you don't want, and choose Delete.

Got it. Thank you very much