What do you actually want to do? Rename some files to BLAH_X where X is a number? That's easy to do in the Advanced Rename dialog and you can create a Rename Preset so you don't have to type in the patterns manually each time, and you can even create a button or hotkey which does the rename in a single click without any typing at all.

Please bear with me as i try to explain - it's a bit complicated.

I want to be select x number of files and then give them a new, uniform name and at the same time numbers from 1 to x.

When the advanced rename dialog pops-up the name is preselected, just as in windows - i simply type the new name. Then comes the problem: if i check the sequential numbering box, only the first file gets the new name. The other files get the old name + number.

But if i choose the preset "number files", then only numbers are given, no new name. Now i have to aim precisely and select the stem of the filename in the "new name" box and give a new name... It's just unnecessarily fussy.

In windows explorer i just select the files, choose rename from the context menu and give a name and a number in () and windows automatically counts the number upwards and renames the files. (Although this is buggy in Vista, it does count only from 1 upwards).

There has to be a better way for this in DO. I suppose i'm to dense to see it

A couple examples. The first renames all selected files with a custom new name with sequential numbering in the middle of the new name (as indicated by the position of [#]), and forces all the files to have the .xmp file extension.

The second screen shot uses regular expressions to do the same thing except it ignores the file extensions of the selected files (leaves the extensions alone).

John, thanks for the suggestions, but that's not what i'm trying to do. Although it helped a little - with the "*" in the "old name" field now i can rename+number all of the files i have selected.

To explain it a bit clearer what i need: i need to rename+number multiple files with minimum interaction, like in windows explorer:

That's only 4 steps and it's very quick to do. The same thing in DO9 at the moment is much fiddlier:

Here i have to do 2 extra steps, wich is unnecessary! Imagine how much the overhead will be if i have to do it 100 times a day...

I think i can get DO9 to do it in only 4 steps if i can alter the factory presets in the advanced rename box. Is this possible? Or to remove them completely and do my own presets? The goal is to have my preset selected as the adv.rename box opens.

If it's still unclear i can explain it in more detail, and/or post screenshots.
jj

Try this button (see here if you don't know what to do with the code block):

If you press it you will be asked for the base name and then it will rename all of the selected files and folders so that they have whatever you enter followed by a number, then their extension.

The button ignores files/folders which don't have a . in their names and might not work the way you want it to on folders that do have a . in their names. I think to make it work perfectly with those cases would take a bit of VBScript. If you need that then shout and I'll write it (it's fairly simple) but if the button above is good enough then I won't bother. 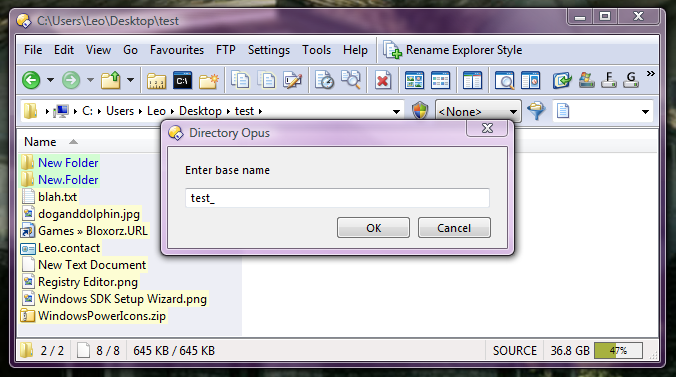 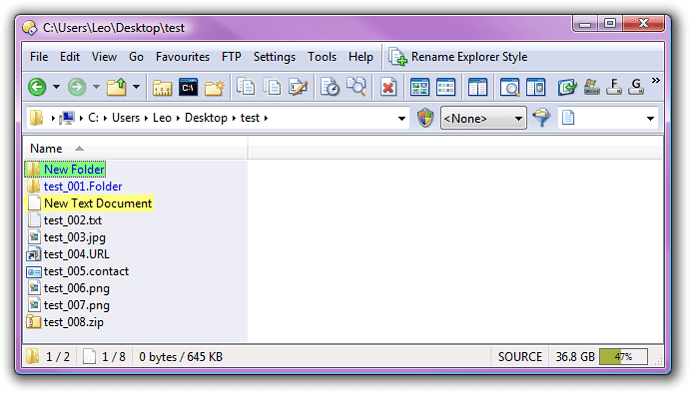 isn't that possible to add a "TYPE=dirs" after the Rename function ?

Thanks, Nudel, this is perfect for me ATM! It even has no pesky parentheses to annoy me...

Nevertheless, do you know if i can alter the factory presets in the advanced rename box? Is this possible? Or to remove them completely and do my own presets?

isn't that possible to add a "TYPE=dirs" after the Rename function ?

You can but I figured it was better to have it work (as well as possible without resorting to VBScript) on whatever was selected and let the user decide what to select.

For other renames you can have a line for files and a line for dirs but in this case that doesn't work because there's no way to carry the number you've reached from one rename to the other (without resorting to VBScript) so you can end up with name conflicts.

Nevertheless, do you know if i can alter the factory presets in the advanced rename box? Is this possible? Or to remove them completely and do my own presets?

You can add or remove any of the non-bold presets in the rename dialog. You can't remove the three bold ones at the top (the Standard/Find & Replace/Reg Exp presets).

If anyone does want to resort to VBScript to make an even better solution for this, my existing script should make a good starting point:

I haven't looked at it for a while but the script may not even need modifying and it might just need a suitable toolbar button which calls it with the right arguments.

i came to the forum because i too was having a problem renaming files, and prefer the simple explorer style of doing it.

I've installed your button and thanks for that, but i think this is a feature that should go into the next version of dopus.

it is too complicated to rename a batch of files at the moment, unless everyone uses your button.

You'll find a button that do the trick here.

Try this button (see here if you don't know what to do with the code block):

I've been usisng this for years now. Never need anything else. Cheers for posting it

In the next update (12.10.3) we'll add an option to make Opus work the same way as Explorer in this respect (without needing a script).

Well it's 2020.. i can't find that option, 30min of googling of this simple task like the guy in 2007,
Because of this simple fucnction i am now back and forth with Explorer and DOpus, renaming and sorting out pictures is not for DOpus ment for sure

If its called the 'simple renaming' well thats a pain for sure with multiple files, one by one renaming....

The option Jon mentioned which makes inline rename (F2 or long click on files) work with multiple files similar to the way it does in File Explorer is:

There are also lots of other ways you can rename multiple files in Opus, depending on what you want to do. Let us know what you're trying to do and we can help in more detail, if you need it.

@lxp Hehe yes I know it can DO properly ALOT more I saw at the settings, but some need also the simple things and only needed

There is also a free renaming utility called Bulk Rename Utility. It can rename anything in any fashion you want. It seems massively confusing to use at first because there are so many options, but after about 10 minutes, you get how the program works. It's easy after that.

You don't need that if you have Opus. Bulk-renaming is built in.

(But we can't tell you how to do things unless you tell us what you want to do.)