This condition has existed for a couple of weeks now, and renders Opus pretty useless! Right clicking in the file list results in the following:

Has anyone come across this problem before?

That is probably caused by a 3rd party shell extension.

Please see this guide for suggestions on tracking it down:

Thanks for the speedy response and for providing the solution. It turned out to be Quick PDF Tools Pro - as your linked guidance says, the last item on the debug list.
Glad to say that Opus is now working normally again. Once again, many thanks.

I was about to post a report for this Quick PDF Tools bug.

Please report the issue to the makers of Quick PDF Tools as they'll be able to debug it easier than we can, and it's probably a bug in their component.

I've had a detailed look at this and added a workaround for the next Opus update.

It's definitely a bug in Quick PDF Tools, but I was able to work out what it was doing wrong and avoid the situation.

(If their shell extension is asked to add itself to a menu, for some reason it goes and queries the details of all existing items in that menu, even though they are nothing to do with it. If the menu is initially empty -- as happens to be the case with Opus -- then Quick PDF Pro has a bug where it queries all the menu items from 0 to count-1... Since count is zero, that wraps around and it queries from 0 to 0xFFFFFFFF. i.e. It asks for a non-existent menu item 4,294,967,295 times, which uses a lot of time and CPU.

They're also not doing the menu icon properly, so it's on a solid white background instead of a transparent background, but lots of people do that and it's only cosmetic.

If you want to disable Quick PDF Tools within Opus until the update with the workaround is released, adding the following CLSID to the ignore_context_menus, similar to the one shown in the screenshot below: 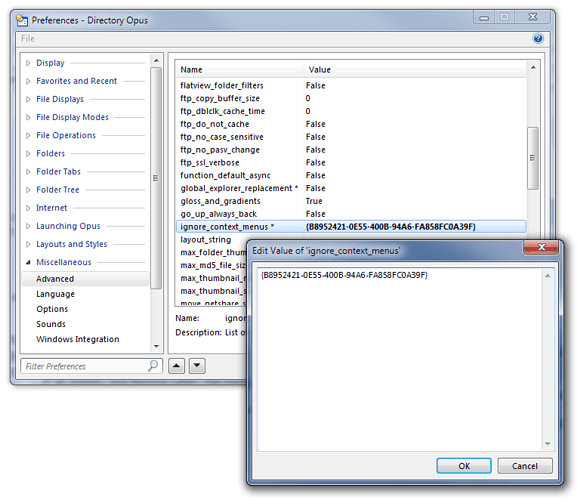 (Once you update to Opus 10.1.0.2 or above, you can remove the CLSID again and you should be able to use Quick PDF Tools again in Opus without problems.)