Running usercommand from outside DO

I have a StreamDeck XL and would like to assign some usercommands to its keys. How can I run them from outside DO (while DO running in background of course)?

You can run them via dopusrt.exe /acmd, but I'm not sure the Steam Deck software lets you specifcy arguments when running an exe. (Much to my surprise.)

There's a third party Steam Deck plugin that fixes that, but it's 32-bit which makes it a pain for some things (it doesn't see the right things in the right places).

I've been thinking about writing my own. But maybe there is a way. Perhaps it'll run a Shortcit which could contain the arguments.

Stream Deck supports executables with arguments, but when running following command (via Stream Deck or cmdline), Windows asks for app to open the file:

Did they add that recently? There wasn't an arguments field when I looked a few months ago. Unless I'm confused. No UAC support was the other issue I had. (Maybe I found an extension with UAC support that didn't allow args or something. I'll have to look at it again.)

Anyway, after /acmd in the command line you should pass the name of the command you want to run, not the .ouc file path. The same as if you wanted to run it from within Opus. (You can pass any arguments you need to give it after that.)

I use arguments like in the example in screenshot. 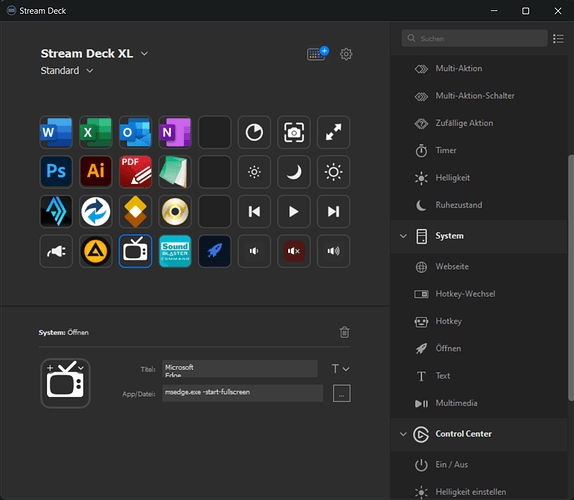 The usercommand in previous post opens Aimp-Player and my Aimp-Toolbar, I just would like to use it with StreamDeck.