Saved FTP settings are not applied

I've just added a new FTP site and entered HOST-address and port: 22. I've configured a ftp user name and the password and pressed OK. In the hardcopy below, you wil lsee the already changed port as mentioned in second step. 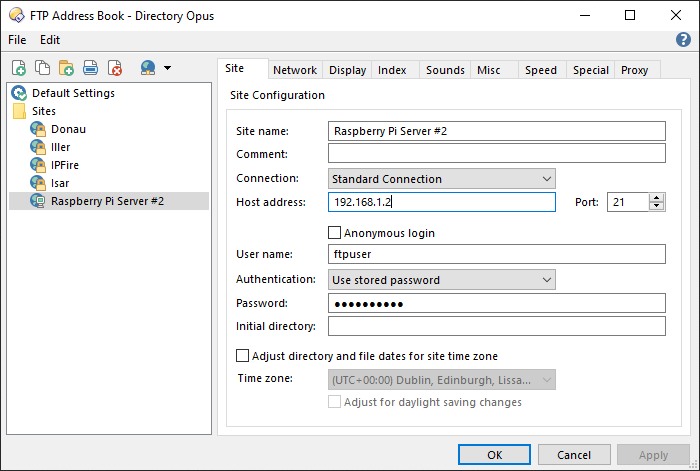 After trying to log in, I noticed that I've used a wrong port: 22 instead of 21. So I re-opened the site configuration windows, changed the port to 21 and pressed OK again.

After trying to access the host again, DO did not recognize the previously changed port. It still tries the old one, see hardcopy of ftp log:

I had to close DO and restart for DO to take over the new setings. Right after restarting and re-trying a connection to ftp host - all runs well.

I haven't been able to reproduce this, unfortunately.

For me, if I edit the port after the first failed attempt and click Apply, the second attempt works immediately.

If the site is already connected when the address book is edited, the changes might not take effect until it has been disconnected. But in the scenario where the port was wrong, there couldn't be any existing/cached connection so that shouldn't be a factor (and doesn't seem to be from my own test).

For what it's worth, I was initiating the connections via the FTP menu at the top of the lister. If you were using another method, let me know and I will try that.

Does it still happen if you do the same thing now?

Can't reproduce either right now and I'm using the folder tree on the left side to navigate between server 1 and server 2.

I had a second issue yesterday, I could resolve myself: The initial directory was wrong set and DO jumped back to the server where I started until I saw my mistake. I had set ~ as initial directory, however the user did not have access too it. Maybe this was in correlation with the port issue?

Don't know exactly and honestly it has resolved itself magically