In the first searches I have done since recently upgrading, the searching never ends. It used to work before my upgrade. For example, I left a single word search running over 2 hours ago in a folder with 60 relatively small files and it is still running! What happened? I LOVE the search feature and really need it to work.

Do you mean the search field at the top right? That feeds your query to Windows Search which is then responsible for the rest. Does the same search in File Explorer work? Does it depend on the folder? For example, a user recently found that Box cloud storage prevented certain searches done via that from working.

You can use Tools > Find Files for Opus's own search functionality, which is independent of Windows Search and generally more robust (but doesn't use an index).

That is exactly what I used. I used it frequently in the old version and it worked every time. In the new version, It just runs forever and never ends with either a successful or unsuccessful search.

Forgive me for butting in, but Leo mentions both search methods: Windows (included in DOpus in the top-right) and the DOpus's own Tools > Find Files.

You said, "That is exactly what I used." But, since he mentioned both, what you used is still unclear.

If "that" is DOpus's own Tools > Find Files, it would help a lot if you can provide a screenshot of the Directory Opus window with the Find Files in action for Leo and Jon to diagnose the problem. Images can be pasted directly into messages here and they will be automatically uploaded and inserted.

Thanks for the clarification. I misunderstood the answer and thought it was a comparison between Windows Search tool on the Taskbar versus DO's Tools> Find Files. I am embarrassed to admit that I never noticed DO's Search box in the upper right. I always use the Tools>Find Files, which is where I encountered this problem. 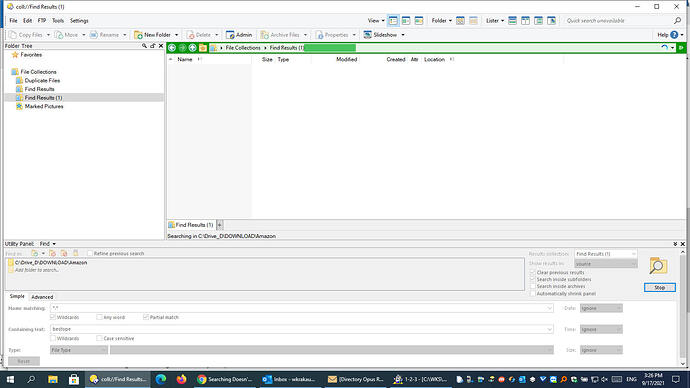 I think I just uploaded the screenshot correctly. That search is still running.

You're doing a Containing Text search there so it will take a long time if there's a lot of data (total size) below the starting folder (or if it's a slow network drive, etc.).

It will be a lot quicker if you use a wildcard to constrain the filetypes that it searches; e.g. if you're looking for Word Documents, enter *.(doc|docx) for the name field.

In this specific search, there are 60 small files in this folder of various types such as pdf, txt, mht and msg. In the past, on my old, slow computer, when this function worked, it would take a minute or so. I expected faster on my new computer which is overwhelmingly faster in all respects. I did not expect never finishing. Other searches that have failed to complete included a file extension restriction and were on both larger and smaller folders. So far, with this new version of DO, I have not had this type of search complete at all.

File Content searching involves IFilters which other software may have installed on the machine (e.g. to convert a PDF file into plain text so it can be searched by tools that know nothing about the PDF format). It's possibly one of those going wrong.

If you make some process snapshots while the search is happening (after waiting a while to make sure it's reached the point where it gets stuck), we might be able to use those to identify where the problem is:

If you find Directory Opus is hanging, using a lot of CPU, or otherwise exhibiting unexplained behaviour, one important diagnostic tool is the generation of manual process snapshots (often called "dumps"). These snapshots capture the state of the Op…

I'll send in screenshots on future hangs and inform you if I get successful searches so we can track down the issue. Back in the day, I could do hex math on core dumps faster than the, then new, hexadecimal calculators, so I am familiar with the concept. I'll also try searching on my other computers to see if there is a difference (I just upgraded to a multi-pack of DO.)

I just re-did this test search and DO is varying between 0% and 1.5% CPU. Oddly, every time I go back to Task Manager, that high number seems to be creeping up. It initially was peaking at 0.5% I;ll let it run to see if there is a trend.

If you make some process snapshots while the search is happening

Please note the two different words bolded and italicized. And, don't shoot the messenger. I'm just trying to help make sure you send the right stuff to them.

Thank you Guardian Angel! I seem to be quite dense lately.

So far, over many hours, DO's search had not exceeded 2% and spends most of its time at 0%. I'll check another machine to see if I get the same results and then start collecting data as per the link.

My system suddenly started searching properly, but I couldn't figure out why, so I did not post about it. Yesterday, searching stopped working again. Today, I was about to repost to this topic, but I decided to experiment first. While experimenting with all of the various settings, I realized that I had accidentally set the Type field to Folders! The system was searching, but only folder names! When I change it to All Files and Folders, everything worked. I hope this helps someone else who makes a similar mistake.

Thanks, again to those who offered help.

When Windows Search stopped working I looked at the Indexing program and saw some signs that all was not right. What finally worked was going into my windows administrator account... There I opened the Indexing program, used the MODIFY section to get rid of old paths, then in ADVANCED section deleted and rebuilt the index, then went back to MODIFY and chose the paths I wanted, and then rebuilt the index. Trying the same without the extra steps took more time and never did dislodge whatever the problem was.