I have a couple of files selected in the source display and I need to select all the files in the destination folder that have similar names. SIMILARBASE would cover the issue but it only works in the source display. Is there a way (even if it's a script) that could convince SIMILARBASE to fetch the information it operates upon from the other display instead of the current one?

Can be done with a short script:

Hmm. It doesn't work as expected. But perhaps I misunderstood something again. It seems that I developed a habit of that lately. Let me ask something.

I've found one of your answers to a similar question (also asked by me, what a coincidence) in which you said that:

Opus will work out the basename ... and then select based on that using a wildcard.

Is this assumption correct?

But you can also pass the Select command a wildcard, which the script could build using any patterns/rules you want.

I have just tried out your script, but nothing happened when I run this script. 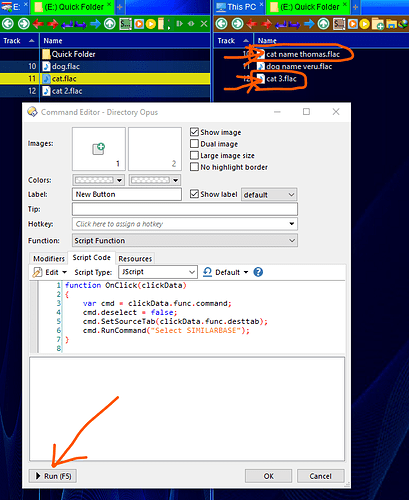 The reason nothing happened was already explained in the two posts before yours. There are no cat.* files on the right hand side, so there's nothing to select.

But you can also pass the Select command a wildcard, which the script could build using any patterns/rules you want.

This gave me an idea and I created a new script-less button, which should work but still does not. It seems that some commands do not work well together with others.

If I run those three commands one by one, they do what I need. If I try to run them all at once, sometimes they do not. If there are any files selected in Destination when I press the button, it works, but if there are none, it does not. Check this short video here.

If there are any files selected in Destination when I press the button, it works, but if there are none, it does not.

{filedest$} says the command should not run unless there is a file selected in the destination.

Is that evaluated the moment the button is pressed or when the command is run? Because there is a file selected in the destination when that command should be executed.

EDIT: nevermind, I changed the code to this:

and now it works as expected.

Is that evaluated the moment the button is pressed or when the command is run?

When the button is pressed, normally, although the Select command being on a line before may complicate things, as well as the button changing which sides are source/dest on the first line.

I would use scripting instead for this, as you can be more explicit about what you're doing, and also completely avoid the source/dest switching which will make the file display borders flash. (The same advice will apply to a lot of situations where you want to do something against the grain that acts on the destination instead of the source. Scripting lets you do that directly, while using non-script commands requires kludges.)

As an aside, I'd also recommend having a browse through Formatting tips specific to the Opus forum for how to format commands/code on the forum so your * characters don't turn into italics/bold etc. (I've edited both posts in this thread to fix them.)

Okay, I think I get it. Could you check this, please? It does what I need, I only need feedback if there were any mistakes made.

Also, thanks for pointing out/correcting my formatting errors.

EDIT: by the way, how do you get the tags (keywords) assigned to a file (Item)? And is it possible to run external commands from a script synchronously?

Only thing I can see that you might want to change is that the filename stem should be passed through Wild.EscapeString so that any wildcard characters like ( and ) in the filename are interpreted as literal characters instead of as part of a wildcard expression.

near the top, then change

how do you get the tags (keywords) assigned to a file (Item)?

Below are scripts which demonstrate how to use DOpus.FSUtil.ReadDir and the FolderEnum object, for reading directory listings, as well as the Metadata.tags collection for listing any user-defined tags set on files. The two scripts below do the same …

And is it possible to run external commands from a script synchronously?

They're synchronous by default, but some programs (most UI programs) will detach themselves unless you explicitly ask to wait for them. Adding @sync: before the command is usually enough (same as in a non-script button), but Windows Scripting Host also has its own methods to run things which can wait as well, if needed.

(Aside: Please Ask one question per thread )

Thank for the help, @Leo!

(Aside: Please Ask one question per thread )

That makes sense. The only reason I asked those questions here, because they are related, though that may not be apparent to anyone without the context. But I was trying to solve problems one by one, and I didn't know those questions would become problems until I was able to select the files I needed.

This is the end-result code I put together from the info you provided. Finally, I was able to achieve my goal, so thanks again.

Still, you're right, I should have disassembled this into multiple questions.

I guess trying to do this with pure non-script commands was a lost cause right from the start...

Looks like the start of a very promising career in scripting

Congratulation! you script was also helpful for me. I have no ability to write this kinds of complex script but I love your script.

Well, I had no such ability 4 days ago either. This skill comes by having two things (three, actually):

And if others benefit from it? That's just the bonus

Looks like the start of a very promising career in scripting

Let's hope it does not come to that. We should not lower the bar so much that would mean me being able to make a career in scripting.

Sometimes I miss the good ol' days when I used to use the built-in file manager in Windows. Everything was plain and simple. You had a problem that was complicated just a little bit over trivial? There was a quick answer (it almost feels like it was a template): "It cannot be done. Now move along, please, there's nothing to see here!". But nowadays? Whenever I ask something, @Leo usually starts his answer with something along the line of "Well, you see, there's this thing called scripting..."

And I should know already that's the moment I'm on the right path. Long and windy one, it will be, but at least not totally perpendicular to the right one.