This was after sitting ALL NIGHT and the spinner had totally stopped. The bottom of the list is equally not sorted.
Makes no sense to me, what am I missing? I would expect the "dimensions" that it uses are WxH sorted...

I think it uses the multiple of W x H.

Your screenshot didn't appear to work.

I missed the error that PDF was not allowed. Attached as PNG. Duuuuhhhh. 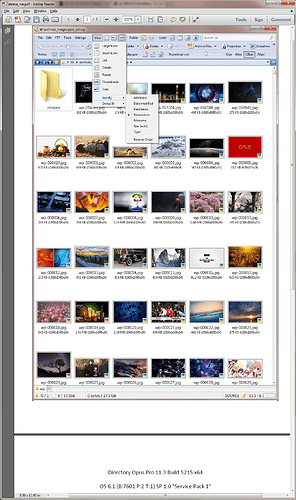 If you switch to Details mode and sort by the same column, does the order make sense there?

After doing that, if you switch back to Thumbnails mode (without changing folder or doing anything else), is the order then correct or does it become wrong again?

So the issue is when I select [View] (to the left of the three format icons, and check Dimensions. It will not be correct. Then if I flip to Detail, then Thumbs, it is now correct.

I am good with the workaround, knowing about it.
Could bite someone in the butt if they do not notice! For instance, I was going to delete all of the smallest pix (out of 37K) but knew the list was not right.

I think it may just be a case of not waiting long enough. To sort by dimensions, the dimensions of all the files need to be calculated; they won't be resorted until all the results are in (the alternative would be that the file display kept jumping around as the results came in, which would make it hard to use).

From the screenshot, there are almost 40,000 decent sized images, and the path starts with "archived" and ends in a "p" so I am using my psychic power to guess that you are in a zip file, where things will be a bit slower (edit: not an archive, after seeing the path in the titlebar, but the rest still applies). So it could take a few seconds to sort by dimensions the first time you do it after reading the folder. (The info is then cached, at least until you go to another folder, and sometimes for longer.)

Fair response, not correct. Seeing this issue the night before, and seeing notes on your forum about waiting for the spinner to stop, I kicked the [View] by Dimension, and let the system sit overnight. In the morning, it was as shown.

From the original post: "This was after sitting ALL NIGHT and the spinner had totally stopped."

You are correct that time is an issue, just not in this particular case. I have watched the dimension slowly populate in the Detail mode, so I do know what you are talking about.

Ah, sorry, I forgot that detail from the original post.

I tried to reproduce this in lots of different ways earlier but could not get it to go wrong.

Does it happen everywhere or just in that one folder? It could be related to certain files or filetypes in the folder, perhaps.

I will work with it later and let you know!

Did I come across the same issue here?
The screenshot shows a bunch of jpgs sorted by dimension, but the sort-order does not account for the number of pixels, it is rather sorting by width it seems?
The files marked in the screenie have the same dimensions, the difference is just horizontal/vertical orientation, the files in between are crops and I expected them to appear on top/bottom of the list. 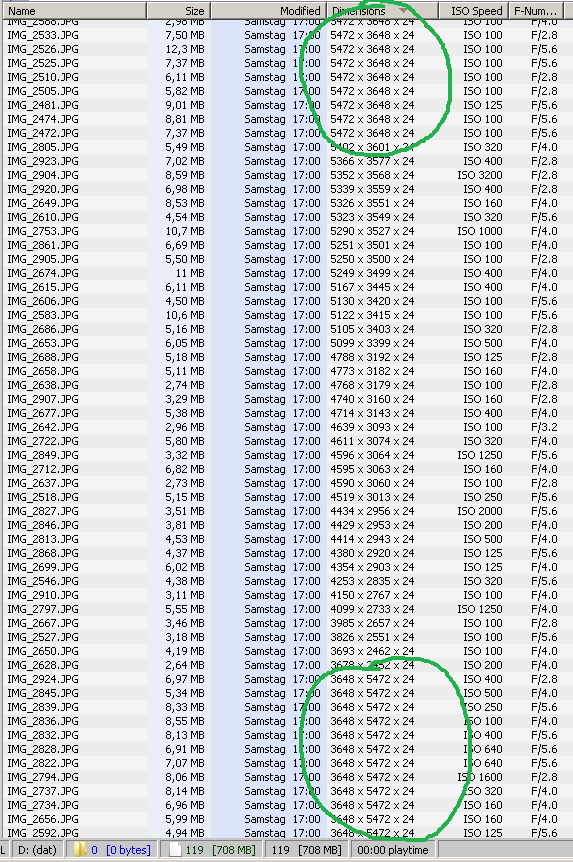