You can already push the || or = button next to the viewer and metadata panels' close buttons to toggle them between the bottom and the right.

If you could include the Tree panel in the set of 'dockables' and left edge and a docking location then... I'd be off to the races

Why would you want the tree under the file display?

I wouldn't, but I would really like to put the Viewer under the Tree in my workhorse file management layout

I don't use the Tree much, its not synched with the folder/file lists, but I like to have it available to get at Desktop, Computer, Network etc 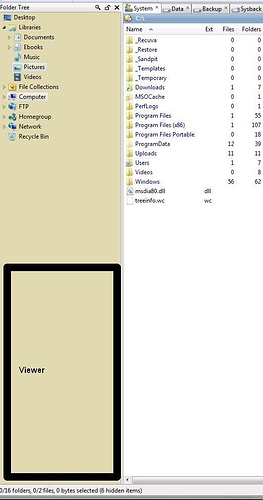 Hello! DO authors, please take a look at how ACDSee interface can be configured- easy repositioning of panels, possiblity to tab multiple panes into one. All this with easy to understand graphical hint system. Please think about implementing it in …

Yes, something like this (Viewer under the Tree) is also on my 'Opus wish-list' 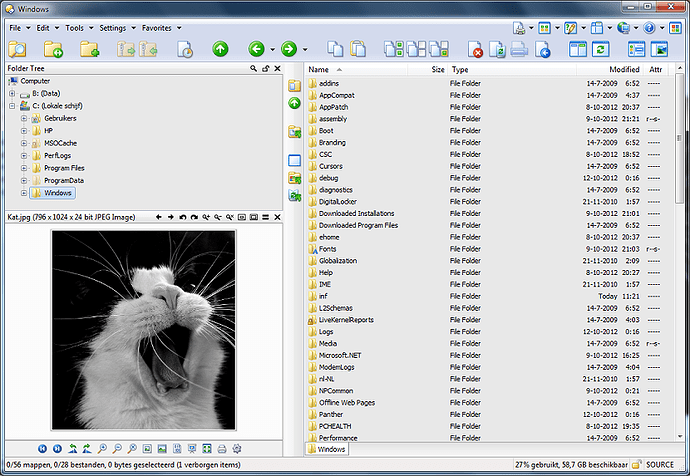 +1 but not for just the viewer pane, also metapane as well. I ~still like the folder tree, but admit I don't always need it taking up the full vertical footprint that it does. My use of either the viewer or metapane is transient enough that the taking some space away from the folder tree while in use would be MUCH more attractive to me than taking away from the file display space.

What steje says goes for me too

If it were possible then I would quite like the option to 'float' the metadata panel ... and a tab

Try looking in the place I said.

You'll want to turn the Operations toolbar back on at east temporarily.

List of FAQs organised by topic // take a peek at the FAQ's under the "Toolbar and Command Editing" heading.

...there is also an entire Buttons & Toolbars sub-forum as well.

For your meta data pane question, right click on your toolbar and select Customize. Then on the default 'Operations' toolbar, under the 'Properties' menu button that Leo mentioned - just right click on the 'Edit Metadata' button and 'Copy' it. Then just go to your toolbar, right click on it and do a 'Paste'. If you don't like the 'floating' metapane, and want the vertically docked panel - you just add a button that runs the command: set metapane=toggle,vert

I have looked the list - but IMO there is nothing as good as the Folder related FAQ's e.g - Folder Formats: Detailed Guide

I do everything from the keyboard - so what I wanted was Ctrl/M... but that only works when Properties menu on the Operations Tool is displayed,

I appreciate I can copy buttons,but I don't want a button to click, what I want is a hotkey to press

Is there a setting to make toolbar button hotkeys always available ?

The Edit Metadata dialogue box from Properties does not track the current item selected, its not in the main Tab Order and I have to use Alt/F4 to get rid of it - so its a poor substitute for the metadata pane

You can create standalone hotkeys via Settings -> Customize -> Keys.

Is it now possilble to place windows as Cris proposed? https://resource.dopus.com/t/suggestion-dockable-panels/14173/1\

I want to place viewer under left file pane, how can I do this?

No, at least not yet, sorry.