I want to suggest that the icons in cascaded lists (using GO with the argument FOLDERCONTENT) should be always small (like in Folder Tree) and not affected by the Image Size box in Customise /Toolbars.

Cascaded menus are especially nice if they show icons as well, but then you can't really use Large as a global Image Size setting for the toolbar. If you do, the icons in the cascade go large as well which looks silly and halves the number of rows in the list. (Compare the two screenshots).

I prefer large icons in my main toolbar, so to get small icons in the cascade I've had to select Default in the Image Size box in Customise /Toolbars and set the Image Size to Large separately in each root-level button on the toolbar. It's over-laborious and means the buttons are no longer general-purpose.

I came across this while making a particular button which I've attached here (cascade folders.dcf) in case I've missed something obvious.
Cascade Folders.dcf (2.34 KB) 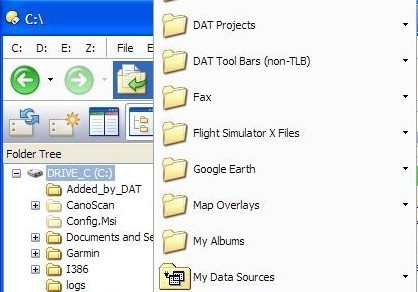 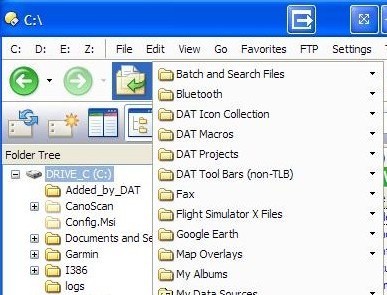 What if someone does want large icons? While you might have to edit several individual buttons to get what you want right now, it does mean that everyone can get what they want.

Remember that the toolbars are stored in XML format so if you do need to do something like change all the buttons to use large icons it can be quicker to use search & replace in a text editor.

Something I'd like to see, which I think would tackle this problem and others, is the removal of the large/small/default whole-toolbar override in the Customize dialog. In it's place could be a simple "mass button editor" where you can say "set all of the buttons in this toolbar to use large icons" and it would update the settings in each button. You could then go and change the odd ones out if needed. I think it would also reduce confusion, since right now there are two settings in two different places which together determine which size of icon is used.

I can't see why you'd ever want large icons there any more than you would in Folder Tree or the folder display pane - but obviously it's just my opinion...

It seems to me that the icon for a button in a toolbar is really a different animal to an icon in something like Folder Tree or a cascade of folders. The first is a target for mousing onto, the second is more like a special character in a line of text.

Factors that determine the best size for a clickable button don't necessarily apply to the size of text, and vice versa. That's why I think it makes sense to control the sizes of these two functionally different types of icon separately. (Maybe the developers simply forgot to protect the cascade icons from the size command when they added the FOLDERCONTENT argument).

Thanks for the search and replace tip. Hadn't realised that I could access the toolbars as toolbar.dop files in \Application Data.

I agree that the procedure for setting icon sizes could be made less confusing. I like having global control for a whole toolbar, but I'd like exemptions to be permitted and to be controlled from the button itself - which I now realise is what you're suggesting - so I'd like to second that proposal