I have a weird issue, and I am not sure if it is a bug or not. It does not happen all the time, but often enough.

I have a default lister that loads up and it preloads some tabs. All is fine, and it works. Sometimes when I go to a tab and change folder, the name on the tab does not change. Usually the name on the tab changes to the name of the folder I am currently in. But sometimes that does not happen. It keeps the original folder name.

The secure screenshot blurs out part of it. But the circled red part reads "Downloads" yet the tab says "Powerpoint". So I get confused sometimes when I go to another tab and then want to go back to "Downloads" I have to remember to click the "Powerpoint" tab.

From some testing It appears that any tab I manually open works as I think it should. The tab name changes to match the folder I am in. However, when I open a lister, it loads a style and some preset tabs on the left and right side. It "appears" that those tabs will not change to match the folder if I change folders. The exception seems to be the tab with my OneDrive folder.

Is there a way so that the tab name matches the folder name all the time? I did not think there was an option for this, but maybe there is. 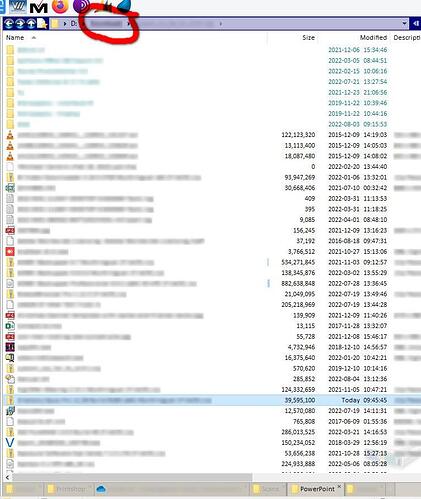 That would happen if you, or a script, had set the tab's name to that string.

Right-click the affected tab and choose Rename. Then delete any name that it currently has and push return.

If the tabs came from one, re-save the default lister, layout or folder tab group as appropriate, otherwise the fixed names will come back the next time they are loaded.

that worked. What I must have done at some point was when I created the tab group #styletabs I had manually put in a name in there instead of keeping it blank. I removed the names and it works now.