Can this command be used in conjunction with the Go FOLDERCONTENT command?

After reading the internal command documentation repeatedly and playing around with it for weeks, I realize that this is true.

Can the context menu be colorized? To become pink, for instance?

To some extent - though perhaps not entirely what you're looking for (I think the overall background color of the context menu may be system-controlled?)...

I guess so. I have tried the Office 2003-style toolbar as you recommend me but that too only goes as far as to customize the highlight and gradient colors of the context menu, not the background color which unfortunately, is what I was looking for.

It's similar to how you've guessed... when you invoke a shell extension through that command, Opus relies on the extension to provide the icon. I believe several of us have asked if it would be possible for Opus to override whatever the extension is supplying - for the case where you want the context menu extension but don't like the icon - or like seems to be your case when the extension seems not to provide an icon at all. Chime in on the Support forum if you'd like to ask GPsoft to comment on making such a change...

Luckily, JRiver provides static verbs for each of its shell extension items. I switched to ContextMenu VERB command and it worked. The desired icon could be loaded for each action I specified.

You can set the toolbar background colour or background image in the Customize dialog. If you need more help please start a new thread in Help & Support as it's off-topic here.

The custom-context-menu does not work for me. Is this How-to up-to-date?

Yes, it still works for me and lots of other people.

Nevermind! I found it! (The "Open With" ContextMenuHandler from the registry).

You can also use FileType OPENWITHMENU

You can also use FileType OPENWITHMENU

Much easier. I changed it.

I've now also used the "File types" facility to create a group called "Scripts" (.bat, .cmd, etc.) with context menus like "Run with args on clipboard.", which is very convenient, after discovering the facility with your help today. Thanks.

How do I open the file type editor?

How do I open the file type editor?

I have Windows Context Menus turned off.

Today I wanted to enable those Windows context items, which let me un/register a Windows Script Component or create its Type-Library. These are context menu items, which are not being sourced from some shell extension under ContextMenuHandlers, but are set up in the registry under shell/Generate TypeLib, shell/Register and shell/Unregister (see image #1) and execute a command line. 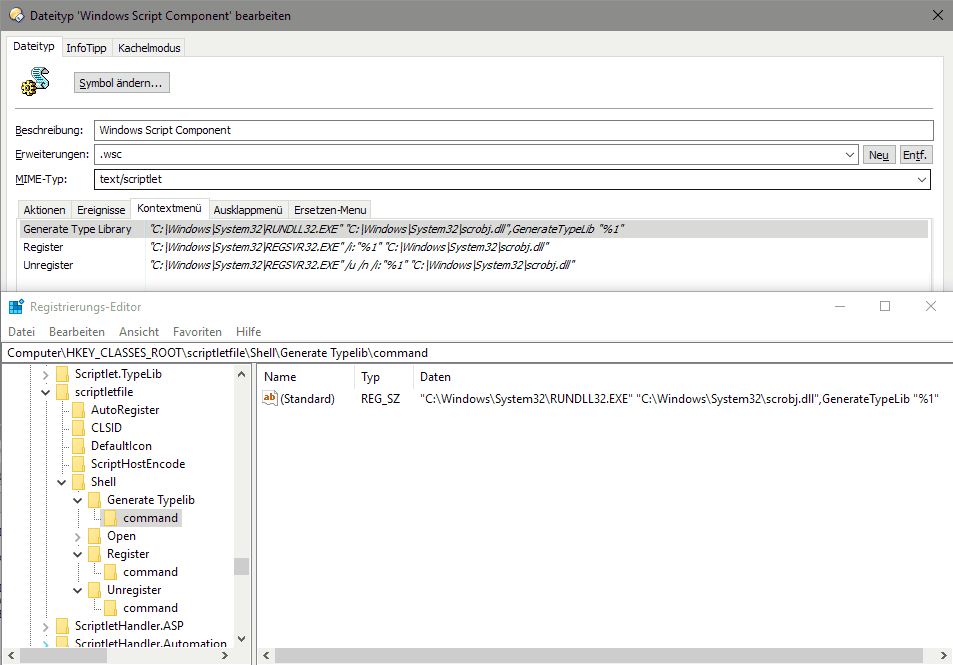 These items do appear in the Dopus filetypes dialog, but they do not appear in Dopus' context menu (any additional items stem from the filetype group and the generic filetype): 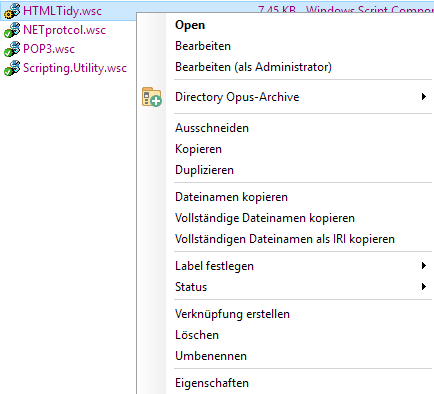 Since these items already appear in the Dopus filetype dialog's context menu settings, I am a bit baffled. What could I do, to have these being displayed? Thanks!

Those items appear fine here, as long as either Preferences / Miscellaneous / Windows Integration / Hide Windows items on file context menus (shift overrides) is turned off, or Shift is held down when I right-click.

So, what would you do, if you'd want the Hide Windows items on file context menus (shift overrides) turned on and would not want to hold Shift?

What disturbs me, is the fact, that they are visible in the dialog, even though I turned Hide Windows items to On. The only way I see I can have those items, is to recreate them as Dopus only items, right? Which results in: 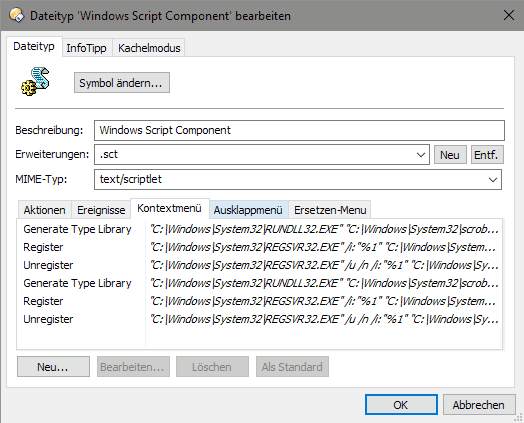 In this case, I wonder, if an addition to the context menu for the item Copy to Dopus only actions wouldn't make sense? And maybe some way to differentiate, like changing font style for the Windows only items?

The option hides (unless shift is held down) items that come from Windows and the Windows context menu system, i.e. everything except Opus-specific commands. Anything that appears when you right-click a file in Explorer, more or less. "Windows items" for short, and lack of a better term.

If you want to keep the option on but also force Opus to show the commands in your screenshot, the thing to do is add new context menu items which run the same commands, setting them to the Run an Opus function (not supported in Explorer) type:

That creates duplicates of the commands which are Opus-specific and will only show up in Opus. (Of course, if you then hold shift or turn off the "Hide Windows items..." option, then you'll see both copies of these commands.)

(Unless it's something you're going to use really often, it's easier to just hold shift when you want them, or other hidden items. You'd only need to do this if you want to hide items by default but force certain items to be shown all the time.)

Okay, that's what I did. I hate the Windows context menus with a passion

, so I had hoped I could clean them up and then never, ever see them again

. At least as long I use Dopus. Thanks for answer.

3 posts were split to a new topic: Cast to Device not in context menu

2 posts were split to a new topic: How do I edit the folder background context menu?