I'm seeing unusual text/characters when I view my desktop with v9. Please look at the IE icon. 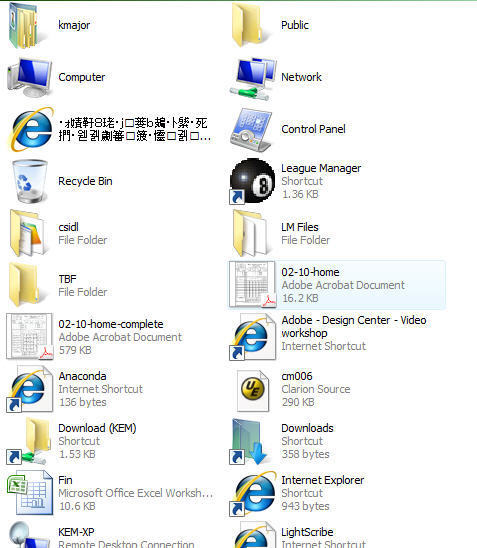 That's quite strange. If you press F2 and rename the icon does the problem go away?

For what it's worth, I don't see the problem here (Vista Ultimate).

PS: If anyone else on Vista wants to try it you can add the IE icon by setting this registry value to zero instead of one:

(I couldn't find a better way to toggle the icon.)

Actually I should have also said that the icon is a standard shortcut to IE. Also, I tried your suggestion of renaming it and it did not seem to change the unusual display. 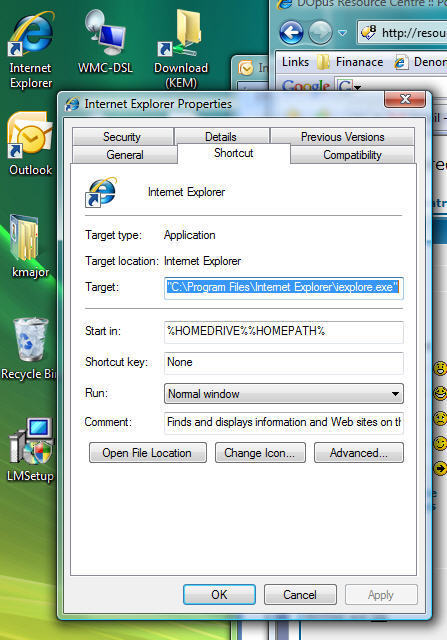 From the first screenshot it looks like you've got both a standard shortcut to IE (bottom-right of the screenshot) which looks okay, but also the "special" shortcut (top-left) with the messed up name.

If you don't want both then deleting the special one will hopefully "solve" the problem (or at least hide it.

[quote="nudel"]From the first screenshot it looks like you've got both a standard shortcut to IE (bottom-right of the screenshot) which looks okay, but also the "special" shortcut (top-left) with the messed up name.

If you don't want both then deleting the special one will hopefully "solve" the problem (or at least hide it.

I'm a bit confused. I only have one icon of any type on my desktop that will launch IE (except for direct web page link icons - where I have dragged a link to the desktop). I definately do not have both a shortcut and the kind of icon you can get that appears to be a direct IE icon (I'm not sure what they are called)

Here is another screenshot in detail mode showing the unusual tooltip that is displayed when I hover over the IE.

I see what you mean now, the shortcut is displayed OK, but it is also showing an IE icon that does not actually exist on my desktop. That is the one with the unusual display.

Have you tried right-clicking the strange shortcut and selecting Delete?

I updated to the "fix" release of 9.0.0.0 and the unusual characters on the mysterious second IE icon has disappeared.

It is still a mystery why the IE icon is listed there at all. Again the only IE icon on my desktop is the shortcut listed near the bottom of my screenshot. There does not appear to be anything on the desktop that the Internet Explorer item with "no type" (4th from the top) is actually representing.

I have not tried deleting it yet as you suggested. I wanted to give it a few days and see if there were any other similar reports. 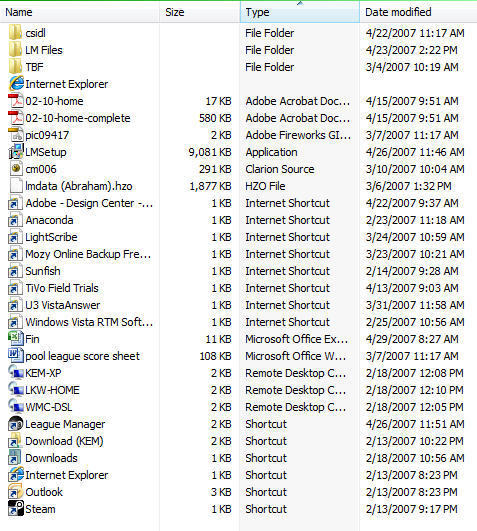 Interesting that the update fixed it. I don't think there was a change directed at this problem. It's good that it's fixed, either way!

It isn't unusual for the Desktop in Opus to show different icons to your actual Desktop. It's the same with Explorer. There are separate flags for which icons are hidden in the Desktop and inside of Explorer/Opus, so an icon might be shown in one place but not the other.

For example, if I run Explorer and go to Desktop it shows IE, Network, Computer and Control Panel, all of which are hidden from my main Desktop.

If there's an unwanted icon just right-click it and select Delete to get rid of it.

Wow. /desktopdir is exactly what I want, I just didn't know about that option. I knew I could create a button with a hard coded path, but that wasn't good for all users. (I use shared DOpus profiles).

I've changed my dektop toolbar button and it's working great.

I knew about those "special" desktop items. I just never recalled seeing one in the lister unless I actually had it "turned on" for display on my real desktop before. Certainly not in another language!

Anyway, thanks again, I consider this issue resolved. - Kelly

There are lots and lots of other built-in aliases like /desktopdir which you might find useful for keeping your multi-user configuration generic. You can get a list of them all, and what the point to, via the Preferences dialog (tick the box shown at the bottom of the screenshot): 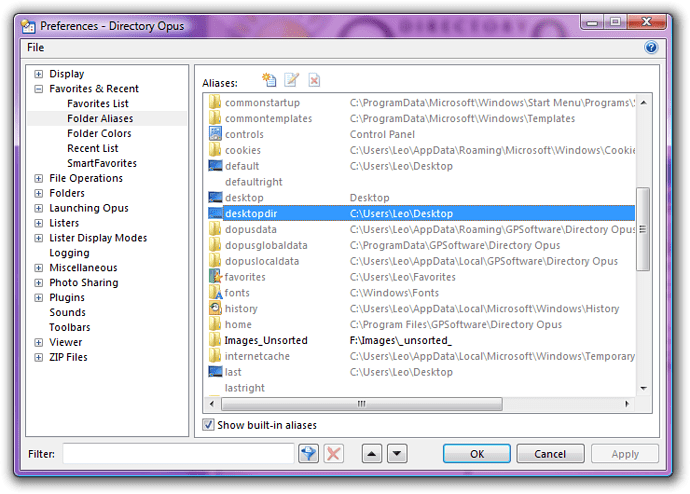